According to WROC-TV, Connor has been diagnosed with PTSD, anxiety, ADHD, chronic headache disorder, and he also suffers from nocturnal seizures. It is this last health issue for which Copper was especially helpful. The boy’s family discovered Connor was having seizures after the Doberman woke Connor’s mother by barking one night and led her to the seizing child.

“I was actually able to see my son having seizure activity, I would have never known,” Jennifer Jayne, Connor’s mom, told WROC-TV.

Copper has also been trained to help Connor cope with his anxiety attacks. The dog presses his body against Connor when he senses the boy is about to experience an anxiety attack. Copper’s close presence helps Connor stay calm and ride out his attacks with a friend close by.

So when Connor discovered the dog who is focused on making sure he feels good was feeling bad, Conner sprang into action. The boy’s family recently brought Copper to the vet and discovered he may have Wobbler Disease, a disease that affects the spinal cord and makes it difficult for animals to walk. The pup will need tests, treatments and possibly a MRI and surgery to treat the issue.

“When we found out how much the surgical consult and the MRI and surgery was going to cost we just realized we just didn’t have that money,” said Jayne.

To contribute to Copper’s feel better fund, Connor recently hosted a yard sale filled with his toys in Fairport, New York. The money he raised will go to pay the 4-year-old canine’s medical tests (which have already amounted to over $2,500 in expenses), physical therapy sessions and any additional treatments.

Currently, Copper is undergoing laser therapy sessions to treat his mobility issues. The dog’s vet is hopeful that this therapy will be enough to get Copper moving fully again. If the Doberman is still having problems getting around following 4 weeks of therapy, alternate treatments (and, likely, surgery as well) will be considered.

In addition to Connor’s contributions, fellow animal lovers have donated to Copper’s care through the dog’s GoFundMe page, where any extra funds will also be donated to other animals in need. Copper’s supporters can keep track of his progress on this page or on his Facebook page.

Jayne is grateful to all who have helped, including Connor, to ensure that Copper gets the assistance he deserves after years of caring for others.

“Your donations have helped make this therapy possible! It is very expensive and without your generosity we would not have the options we do so we thank you, so very much,” Jayne wrote on Copper’s GoFundMe page. 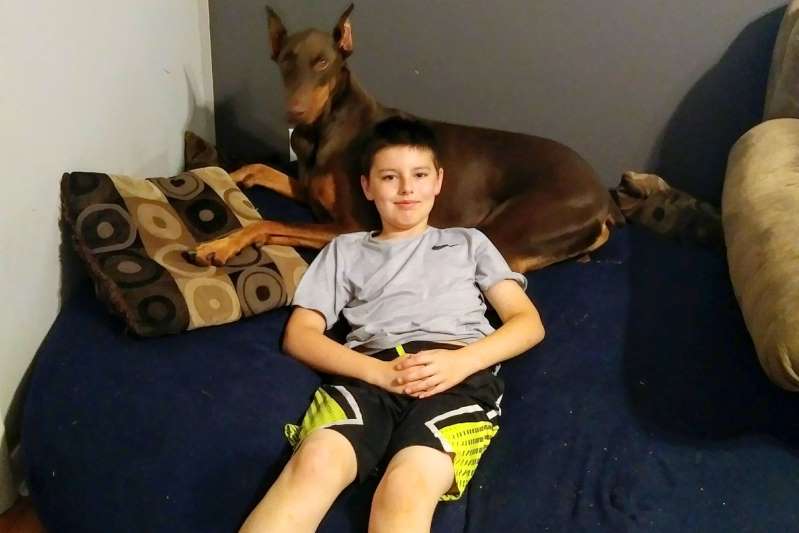