© Local News RSS EN-US By CBS Pittsburgh HARMARVILLE Twelve ducklings and their mom were unable to cross the road and get to the other side ...

Twelve ducklings and their mom were unable to cross the road and get to the other side without the help of some local women in Harmarville.

Those women were headed to work Thursday morning when they spotted the mother duck in distress, and they quickly jumped into action, even stopping traffic.

One by one, the 12 ducklings fell into a sewer grate while trying to cross Freeport Road, following their mom. Lisa Tovcimak spotted them on her way into work.

Tovcimak stopped her car and saw some of the ducklings when she looked down into the grate.

“There were three left. I tried to reach down to grab the last three before they fell in the grate. The mom was just in distress because all of her babies are in the grate and she didn’t want to leave them,” Tovcimak said.

Three other women driving by realized something was wrong and actually stopped traffic to help.

A man and his friend stepped in and moved the grate and pulled out each of the 12 ducklings one by one.

“I came around as fast as I could in my car, grabbed two reusable grocery bags, went over there and said put the ducks in here so we could herd them all into one place,” said Diane Bureman.

Dressed in their work clothes and high heels, the women took the ducklings to a nearby stream.

“After the mom and babies were reunited, we were all so excited we did a group hug,” said Bonnie Wymard. “We were jumping up and down. It was an emotional moment.”

For four women who were complete strangers just a few hours before, the rescue has created a bond.

Those women say they’re now friends for life after this unforgettable rescue. 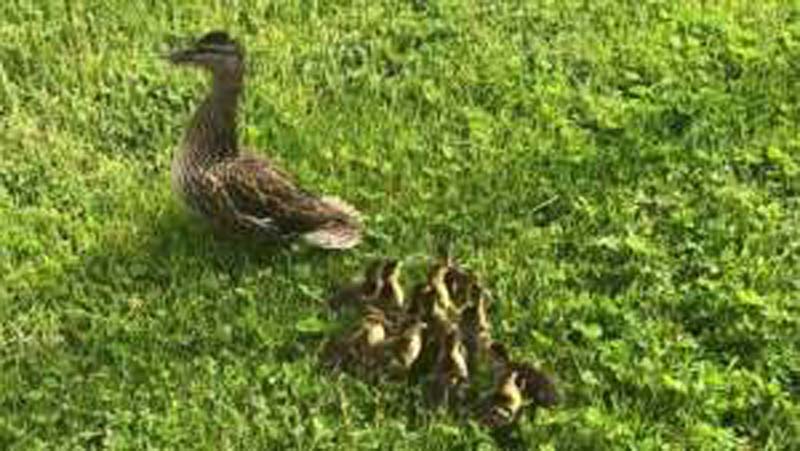