Watch: Family barely escaped an attack by cheetahs after getting out of car at a Safari Park

By Daily News Staff A French family barely escaped with their lives after exiting their car not once but twice to photograph the full-grown ... 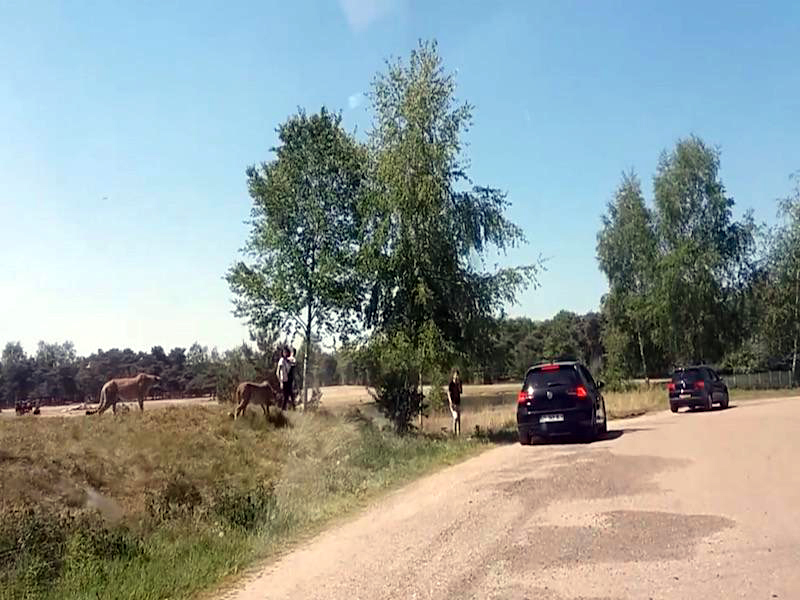 A French family barely escaped with their lives after exiting their car not once but twice to photograph the full-grown cheetahs at a safari park in the Netherlands.

The first thing visitors are told when visiting a drive-through safari park is to never, under any circumstances, leave their vehicles. Failing to follow this most important rule can lead to serious injury or even death from the wild predators roaming the grounds. But that risk was apparently not considerable enough to deter a French family visiting the Beekse Bergen safari park, in southern Netherlands, from getting out of their car with their small children, just so they could snap better pictures of the cheetahs roaming around.

A video that has been doing the rounds online this week shows the family of five- two women and three young children - pulling their car over and getting out to photograph a group of cheetahs lying in the grass only a few feet away. At first, the animals seem to completely ignore the tourists, who eventually get back in their car and continue the tour down a dirt road.

The video cuts as the French tourists drive of, only to resume with one of the cheetahs they had photographed earlier sprinting towards something. That something is the same group of clueless tourists who had once again exited their car in order to get better snaps of the incredibly fast predators. This time, the cheetahs not only notice them, but surround and prepare to attack them as they would any other prey.

One of the women realizes the danger and quickly gets into the car, as does one of the children, but the other woman, who happens to be carrying a small child in her arms, doesn't seem too bothered. She just casually walks toward the car, shooing the animals away with her hand. Believe it or not, they all makes it back to the car unscathed, which I consider nothing short of a miracle, under the circumstances.

A spokesman for the Beekse Bergen safari park confirmed the authenticity of the video shot by other tourists, and added that the park instructs visitors to never leave their vehicles and warns them about the dangers of interacting with wild animals.

"We inform visitors about the risks in several languages throughout the park," the spokesperson told NOS Radio.

Niels de Wildt, the park's manager said that one of the reasons the clueless family escaped unscathed was that the cheetahs are on a food schedule, so they were not particularly hungry at the time. However, people shouldn't forget that these are unpredictable predators that can bring down small antelopes.

"These people have been incredibly lucky," de Wildt said.