They're married, they teach at different schools — and they both got a great surprise the same day

Jeanne Ossman, a teacher at Maple Lawn Elementary in Sumner, Wash., didn't think too much of it when her husband, Ray Ossman, appeared at a school assembly May 9.

She thought he was there for support as she was surprised with a $4,395 Teachers and Technology Grant from CenturyLink.

"I thought he was just here to take a videotape of me, so when he walked out with a check, (I thought) 'What?'" Jeanne said.

Ray, who is the tech coordinator at Cascade Christian Schools in Puyallup, walked out to meet her with a matching $5,000 check from CenturyLink. As it turns out, the two had both been chosen as one of 21 teachers in Washington state to receive the grant.

The Teachers and Technology Grant is open to pre-kindergarten through 12th-grade public and private school teachers and is "designed to help teachers innovatively implement technology in their classrooms to increase student achievement."

The two applied for the grant last fall. While they work with different grades, they both wanted to integrate technology into the classroom.

That Wednesday, CenturyLink representatives surprised Ray in front of Cascade Christian students. An hour later, they drove to do the same for Jeanne at Maple Lawn.

"When I saw CenturyLink on the screen I kind of felt sick to my stomach because I was so excited," Jeanne said.

CenturyLink region operations manager Stan Choate remembered seeing two "Ossman" recipients and wondered if they were related. There hasn't been a case of two married recipients in the history of the grant's 12 years, he said.

Ray encouraged multiple teachers at Cascade Christian to apply for the grant. The grant money awarded to Cascade Christian will go toward production of the school yearbook as part of the yearbook and leadership program run by teacher Kendra Jennings.

Jennings wants to bring 21st-century skills into the classroom, Ossman said, but it's hard to do with small touchscreens. The grant will purchase larger touchscreens for students to work with collaboratively.

There will also be a "virtual reality segment in the yearbook where you can put your phone over different parts of the yearbook and you can watch videos from the school year," Ray said.

"We don't get to go on a lot of field trips — we get one a year and the kids pay and the PTA pays for the bus and to be able to bring all kinds of science to (students) is exciting to me," Jeanne said.

"We really want to go to Norway and Greece and Rome because we studied all of those in our English language arts this year," she added. "(With) virtual reality they'll actually go into the Colosseum and they'll see the ruins and they'll understand what we're talking about because some of us have been there and some of them may never go there but they'll understand what a tiny part of the world we are."

Jeanne said she plans to apply again in the coming years to get more virtual reality glasses so more students will have access to them.

The Ossmans live in Bonney Lake and have been married for 30 years. 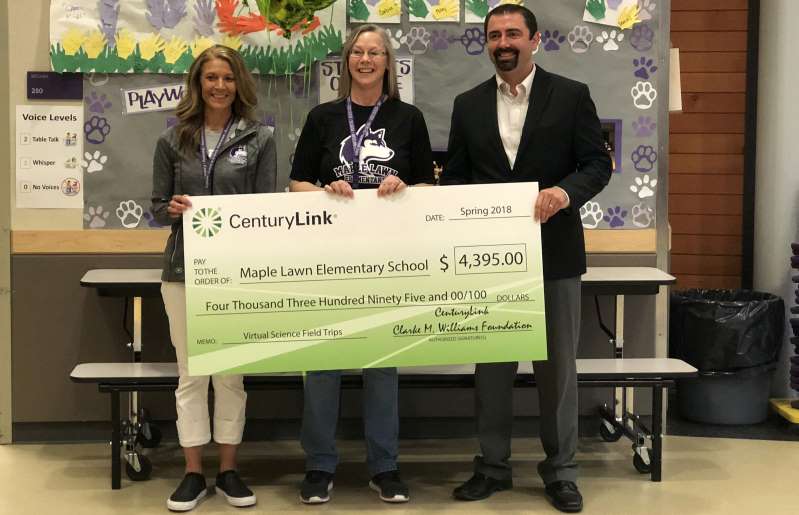