On a corner court at the Balboa Tennis Club on Tuesday, David Villarreal hustled after a shot bee-lining toward the baseline. The ball arrived first as he strained, barely tipping it as the target dribbled harmlessly out of bounds.

The former Marine suffered four strokes that left him confined to a wheelchair. The source was head trauma suffered somehow, somewhere. He isn't quite sure. Villarreal has no memories before Jan. 17, 2012 - not of his children, not of his mother and certainly not of deployments to Beirut, Panama and the Middle East.

Ask Villarreal why playing tennis matters so much, regardless of shot execution or result, and the Seventh Annual National Wounded Warrior Tennis Camp suddenly becomes something far more powerful than sports.

"It shows me I can still be me," said Villarreal, of Temple, Texas. "I can get past the depression. I can get past the PTSD. It almost brings me to tears. I associate tennis with life. I've got to keep moving to chase that ball, to keep going.

"So when I got out on a court, I've already won. How many people who suffer four strokes are out there playing tennis? If I hit the ball over the net, that's just icing on the cake."

The weeklong camp attracting 55 active-duty service members or veterans from 20 states is simply tennis to only those unwilling to spend time watching the players and all those walls - physical, mental, emotional, social - crumbling around them in the San Diego sun.

Too many at the camp wrestle with the isolation. They feel the eyes, the awkwardness, the lack of understanding and compassion and hope. They long for connections and community.

Then, they pick up a tennis racket and wonder if it's a magic wand.

Laura Ortiz, an Army veteran from Miami, lost her right leg in a non-military motorcycle accident 10 years ago this July. An impatient, merging driver clipped her back wheel and launched her 50 feet through the air. When she landed, she only realized something was seriously wrong when she saw the terrified look on the face of a friend who rushed to the scene.

Ortiz first attended the camp as a participant, but organizers were so floored by her positive energy and influence that they flew her back as a staff member.

What's this camp and place offer?

At some point in life, most of us must decide how to address some form of crushing adversity. Do we cave to the darkness and surrender to the suffocating helplessness? Or do we shift eyes to the path forward, rather than the rocky route behind?

Tennis provides the forum. The players fuel a shared light.

"There's a lot of healing going on here," he said.

Kappes, who began his Navy career during the 1980s in San Diego, estimated that 80 percent of participants suffer from some form of post-traumatic stress disorder.

"People have told me they've been in a dark place, hit rock bottom, considered suicide and the camp saved them," he said. "We use tennis as a means to get people together."

All of the heavy realities and distressing anecdotes reflect the struggles that continue. In no way does it relay a sense of what the camp feels like. It's feels like fun - and family.

Doubles partners Corine McGowan and Jemma Collins, of La Mesa, laugh about as often as they swing. When the day's sessions ended, someone mentioned that they visited to find out if the doubles team was bound for Wimbledon.

"You hear that noise? Do you heart it?" said Collins, cupping a hand to her ear. "That's Serena's knees buckling."

Collins is an Army veteran who busted up a knee racing up a hill during drills in Germany during Operation Desert Storm. She picked up tennis at 71, chasing shots Tuesday in a bright, striped-yellow shirt. Her smile, brighter still.

Griffin, the tennis director, long ago nicknamed her Precious. It stuck.

"You can go to the V.A. or go to therapy and do your exercises," Collins said. "This is way, way more. You meet everyone. You get moving. You know what they say, 'motion is the lotion.' "

Court 15 became open-mic night. Griffin needled players rotating in and out as he lobbed shots sky-high. At one point he calls out names to confuse doubles partners. When a shot lands unclaimed between them, one good-naturedly complains he instructed her teammate to handle the return.

"I didn't say for her to get it," said Griffin, mischievously "I just like the sound of her name."

The contagious tone infected a camper named John, who confidently shouted with one of those galactic lobs waiting to rush back to earth: "I eat those things for lunch!"

Now it was Griffin's turn to laugh.

"We're planting a seed," Kappes said. "This tennis community becomes another line of support when they get back home."

Nearby, Villarreal pursued another shot.

"Everybody out here has one thing in common: They're fighting a battle," he said. "You can paint a horse any color you want, but at the end of the day it's still a horse. It doesn't matter how or why you're hurting. Everyone here, in some way, is hurting.

"Tennis is something positive to focus on. It's a great healer."

The ball arced perfectly off Villarreal's racket for a drop-shot winner. 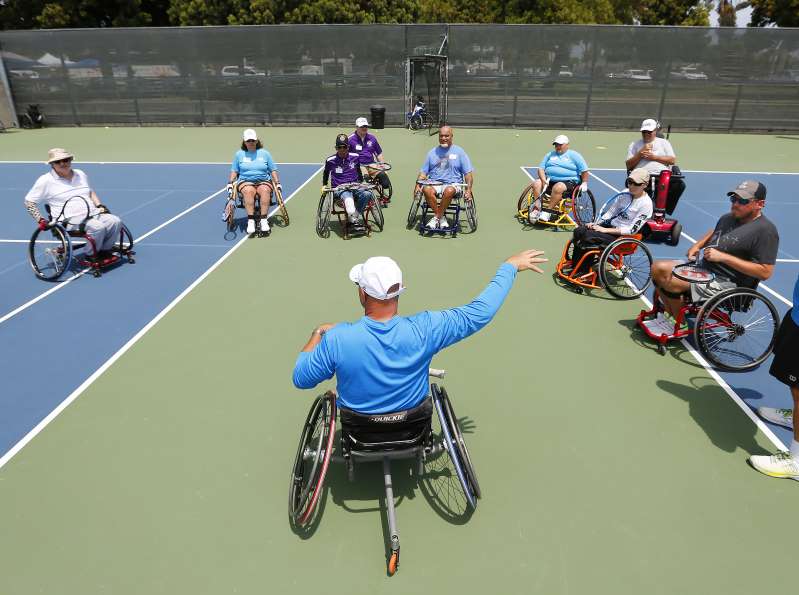