© FoxNews.com Girls advocacy group in Kansas gives special thanks to our first line of defense. By Kathleen Joyce , FOX News A group of Ka...

A group of Kansas kids is sprinkling around kindness and gratitude and making life a bit sweeter for first responders.

The youths, who participate in Girls on the Run, an after-school program at Clear Creek Elementary in Shawnee, Kan., baked, frosted and decorated 500 cupcakes for their local heroes.

Ainsley Gale, a fourth-grader involved in the program, told FOX 4 Kansas City that the first responders deserved a treat for all of their hard work.

“They help a lot of people because they’re the first ones to get the call,” Ainsley said.

Girls on the Run is a non-profit organization that helps “teach life skills through dynamic, interactive lessons and running games,” the organization's website states. The program is nationwide and inspires girls to make the impossible, possible.

Kendall Herman heads the organization at Clear Creek Elementary, which consists of 34 members.

The girls presented their homemade goods to first responders in Johnson County.

Lt. Lisa Hemphill of Johnson County said she received a cupcake on Tuesday.

“It makes me feel like I could be a good role model for girls,” Hemphill said. “Hopefully, one day they can do something like what I’m doing, whether it’s in EMS or being teachers or whatever work they want to do.”

Ainsley said despite having a large amount of respect for first responders, she sees herself working in a different building when she grows up -- the White House.

“I want to be president,” she said. 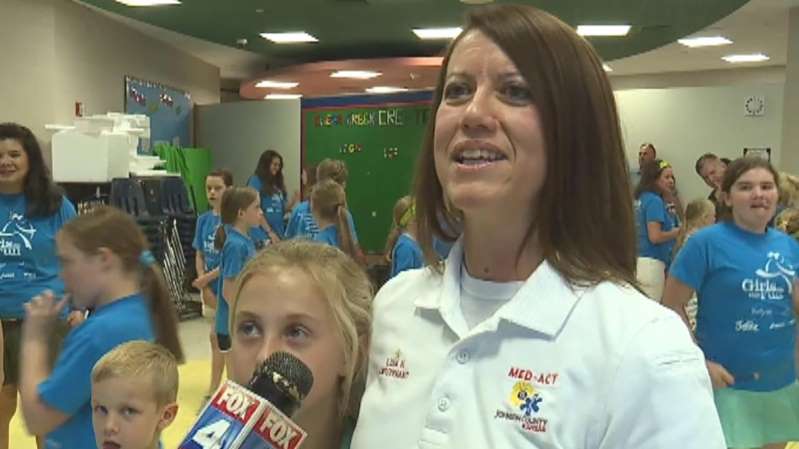