Mom of Five, Once a High School Dropout, Graduates from Law School with Help from Her Kids

© Richard Holman Photography By Cathy Free , People One morning nine years ago — at the height of her despair — Ieshia Champs thought about ...

One morning nine years ago — at the height of her despair — Ieshia Champs thought about ending it all and driving her car off a freeway bridge after dropping her children off at daycare.

Last week, Champs graduated from Texas Southern University’s Thurgood Marshall School of Law at the top of her class. And the Houston-based single mom — a former foster child and high school dropout — doesn’t have to look far to know what gave her the courage to go on.

“My five children kept me going, and the grace of God,” Champs, 33, tells PEOPLE. “There were a lot of times when I cried, and I had many numerous emotional breakdowns along the way, but I did it. Actually, WE did it. I couldn’t have asked for a better family and group of friends to help me along the way.”

A photo posted by one of her church leaders, Richard Holman, of Champs and her children holding “I Did It” and “We Did It” signs has now gone viral, shared nearly 2 million times — and counting — on social media.

“I couldn’t have gone back to school without their help — they inspired me not to give up,” she says. “None of us knew what to expect or how rigorous it would be, but everyone chipped in. While I was cooking or combing somebody’s hair, they’d grill me on legal stuff with flashcards, and I’d have the kids sit as a mock jury to reiterate what I’d learned that day.”

She adds, “They must have been bored out of their minds sometimes but they never complained, even when I’d shut myself in the closet to cry.”

“We’re so proud of our mom — she’s been our rock,” David Jr. tells PEOPLE. “She’s been an amazing role model for me and my sisters and brothers, and I’m so glad that she’s my mom.”

Hugging her kids after the graduation ceremony was the ultimate high for Champs, who experienced more tragedy than she thought she could bear back in 2009.


Her family lost everything in a house fire, her ex-husband died of cancer when she was seven months pregnant, her mother suffered a stroke, and Champs, then 24, lost her job as a Sprint customer service representative — all in less than a year.

“I didn’t want to be bothered with the cares of the world any more,” she tells PEOPLE, “because it seemed as though nothing good would come my way. I tried to swerve off the freeway, but a car passed me so quickly that it scared me, and I kept driving and headed home. It still hurts today to think about it.”

After her thoughts of suicide, it was Champs’ pastor, Louise Holman, who encouraged her to get her GED, then go to college and law school.

“She told me that God wanted me to become that lawyer I always wanted to be,” she tells PEOPLE, “and I thought, ‘How did she know that I wanted to do that?’ It was always a dream, but I thought I was too old at that point.”

With help from student loans and a part-time tutoring job, Champs attended Houston Community College to get an associate degree, followed by a bachelor’s degree from the University of Houston before attending law school and working as a paid intern for the Harris County Attorney’s Office.

She’s hoping to specialize in family and juvenile law someday, but first there’s one more task that she needs to take care of.

“Beginning this week, I have to start studying to take the bar exam in July,” she tells PEOPLE, “so it’s not over yet. I’ll take a deep breath, then with the kids’ help, I’ll dive right back in.” 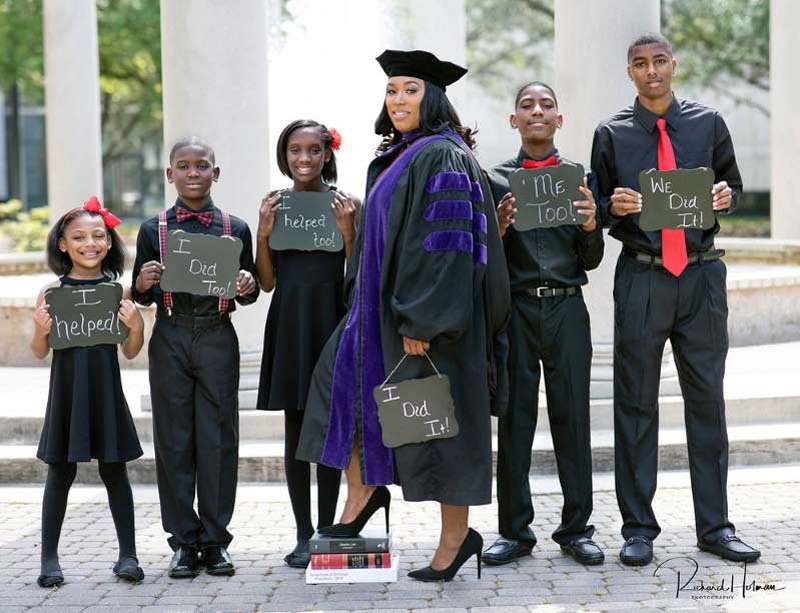