© Vivek Jindal wedding-while-in-labor By Jordana Horn , TODAY Most people, when they're in labor, aren't really in the mood to mee...

Most people, when they're in labor, aren't really in the mood to meet new people. But New Yorker Sushma Dwivedi Jindal not only met some new friends while in the labor and delivery ward of New York Presbyterian/Cornell Weill Hospital last week — but she also married them.

Jindal was getting her epidural when the anesthesiologist, Dr. Faridda Gaddala, mentioned that there was a search afoot for the hospital chaplain, so that he could officiate at a wedding on the ward.

Another woman giving birth, Brianna Doyle, had planned on marrying Casey Walko at New York's City Hall before having their baby — but had gone into labor earlier than expected.

The couple had gotten their wedding license the day before, but now thought it would likely be impossible to get married before the baby was born, since Doyle's water had broken and labor was officially in progress. The marriage license, conveniently enough, was in the bag the couple had with them in the hospital.

"I don't know if this will feel helpful or weird, but I was ordained on the Internet and I can perform the ceremony," Jindal told Gaddala. She had gotten ordained to perform weddings online by the Universal Life Church four years before, but had never performed a wedding.

The anesthesiologist, Jindal said, was very nice, but said, "You're also in labor."

But the chaplain, it turned out, was not qualified to officiate weddings. Word spread that Jindal might be able to do it.

"Someone else came in and was like, 'Uh, can we talk for a second, no pressure at all, it's the weirdest timing ever, but if you could do it, in fact, we'd like to take you up on it,'" Jindal recalled.

Her husband Vivek wondered aloud, "What if you start active labor during the wedding?" Jindal said, "Well, we'll figure it out."

"It just really felt like the right thing to do, to me," Jindal, who works in public relations, said. So she followed through on her offer, despite being in labor with her second child.

"There was just this universal sisterhood to it," Jindal recalled. "I felt compelled to help another parent out. Delivery is stressful enough, and adding another stressor of wanting to be married, I couldn't imagine. And if I could find a way to take a smidge of that away, great.

"Except I couldn't move anymore," Jindal said, because by that time, the epidural had kicked in.

And so, the hospital staff brought the bride and groom into Jindal's room in a little processional. The labor and delivery nurses had braided baby's breath into Doyle's hair, and fashioned a makeshift bowtie out of a knit newborn hat for the groom.

"I was just laying there in bed and felt like Jabba the Hutt," Jindal laughed. "Then I performed their wedding ceremony. And while I'm certain it's not how they had ever imagined it, it was indeed full of love and good wishes for the journey they were about to embark on together, both as parents and as a married couple."

And by the next day, newborn boy Nayan Jindal and girl Riley Walko lay in their mothers' arms, unaware of what had so recently transpired, but surrounded by a halo of love.

"There's so much bad news in the world," Jindal said. "It felt great to do something good." 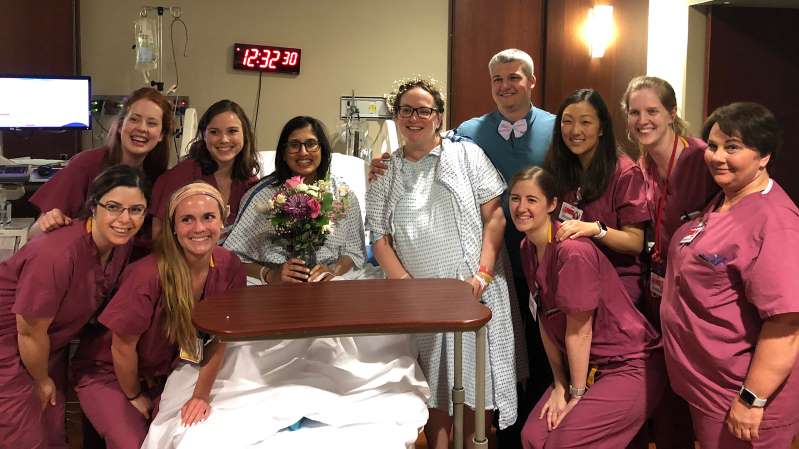