Don, 64, is the world record holder for consumption of McDonald's Big Macs By Daily News Staff You may say you love fast food but you...

You may say you love fast food but you've got nothing on Wisconsin's Don Gorske. The 64-year-old American just set a record for "Most Big Macs consumed" after eating his 30,000th burger from McDonald's. What's more, the man, who says he typically eats about 14 Big Mac burgers a week, tells New York Post he is as "healthy as a horse."

On May 4, Mr Gorske ate his 30,000th Big Mac at the same restaurant where he first ate McDonald's signature burger in 1972, reported FDL Reporter.

Mr Gorske first set the Guinness World Record for eating 28,788 Big Macs in 2016. He had said then that he typically bought his Big Mac burgers in bulk each week (over a dozen of them!) and microwaved them at home.

In the last four decades, the McDonald's fan has gone only eight days without eating a Big Mac. A memorable one includes the first day ever in 1982, when he drove in a snowstorm to get his burger but found the restaurant shut due to the severe weather, reported The New York Post.

"I also made a promise to my mom. She requested I not eat a Big Mac on the day she died, in remembrance of her," Mr Gorske told FDL Reporter. That was on April 27, 1988.

"I love the patties, I love the sauce, I can't get enough of it," he told The New York Post, insisting he's healthy despite his rather... umm... unhealthy fast-food laden diet. "I'm healthy as a horse. I weigh 190 pounds, and my cholesterol is 165," Mr Gorske said. "I'm better than normal."

He admitted that Big Mac burgers make up about 90 percent of his diet.

"People make fun of me, but it never bothered me," Mr Gorske told FDL Reporter. "At my last medical check-up I had low cholesterol and my blood pressure was perfect."

According to McDonald's own nutrition calculator, one Big Mac burger contains 540 calories. 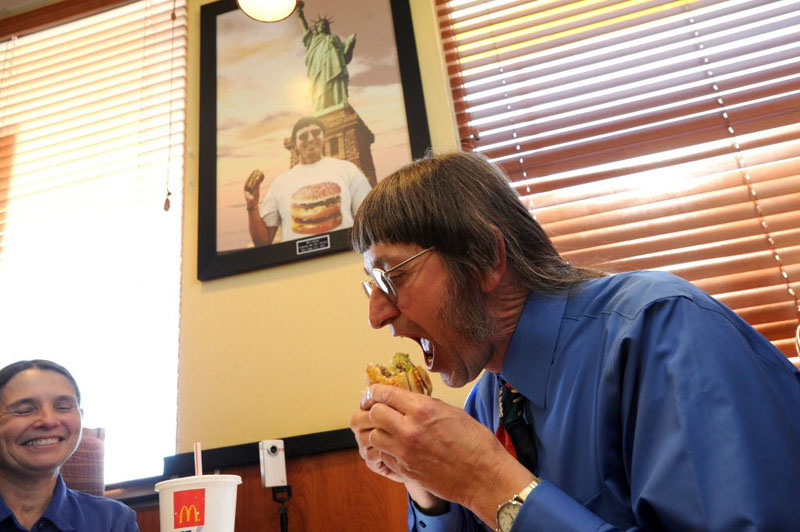