In a bind, she brought her baby to school. Her professor held the child while he taught physics.

Kristen Black took a semester off from college to have her baby. She was determined to go back and continue her studies to become an optometrist, her dream job.

Black, 21, did just that when she re-enrolled at Arkansas State University this spring as a biology major. She and her boyfriend found a daytime sitter for their little girl, Izzy, now 8 months.

As a requisite, Black had to take an introductory physics course.

Her professor, Bruce Johnson, was known for holding extra study hours twice a week to help students with their homework. Most of the 80 students who took the class attended the study hours, because the subject matter is challenging. He booked a big room for the sessions.

But Black couldn’t attend because she had to pick up Izzy from the babysitter. A few weeks ago, she felt as if she needed to go to a study session. She wanted help before an upcoming test. She asked Johnson whether she could bring Izzy.

“I was like, ‘I’m struggling with this section, but I can’t come because I have to get my baby,’ ” Black said.

He told her it was fine to bring the baby.

About halfway into the two-hour study session, Johnson walked around the room and stopped at Black’s desk. Izzy smiled at Johnson, who himself has four kids and seven grandchildren.

“Anytime someone that cute smiles at you, it melts you,” Johnson said in a phone interview this week.

Then Izzy leaned over. Johnson asked if he could pick her up. He did an airplane ride with her and cooed at her for a minute.

Izzy was happily on his hip for about 20 minutes as he helped students work through the concept of the ideal gas law.

“I was able to take notes while he was holding her,” Black said. “It was the sweetest thing ever.”

He gave Izzy a marker with the cap on to play with while he was writing on the board.

Black thanked him for his kind gesture. Johnson told her: “We’ll do what we can to get you through this class.”

She sent the photo to her mother, who was blown away that her daughter’s professor was so kind-hearted.

“It means a lot to have teacher genuinely care about his students,” Black said.  “He’s a great teacher.”

Black also happened to show the photo to the university’s chancellor, Kelly Damphousse, who put it on Facebook.

Johnson, 58, who describes himself as a quiet man, said other students have brought kids to class from time to time during his 24 years teaching at the university.

“When you see somebody with children who is going to school, they are amazing to me,” Johnson said. “I can’t say enough about what they’re doing and sacrifices they’re making.” 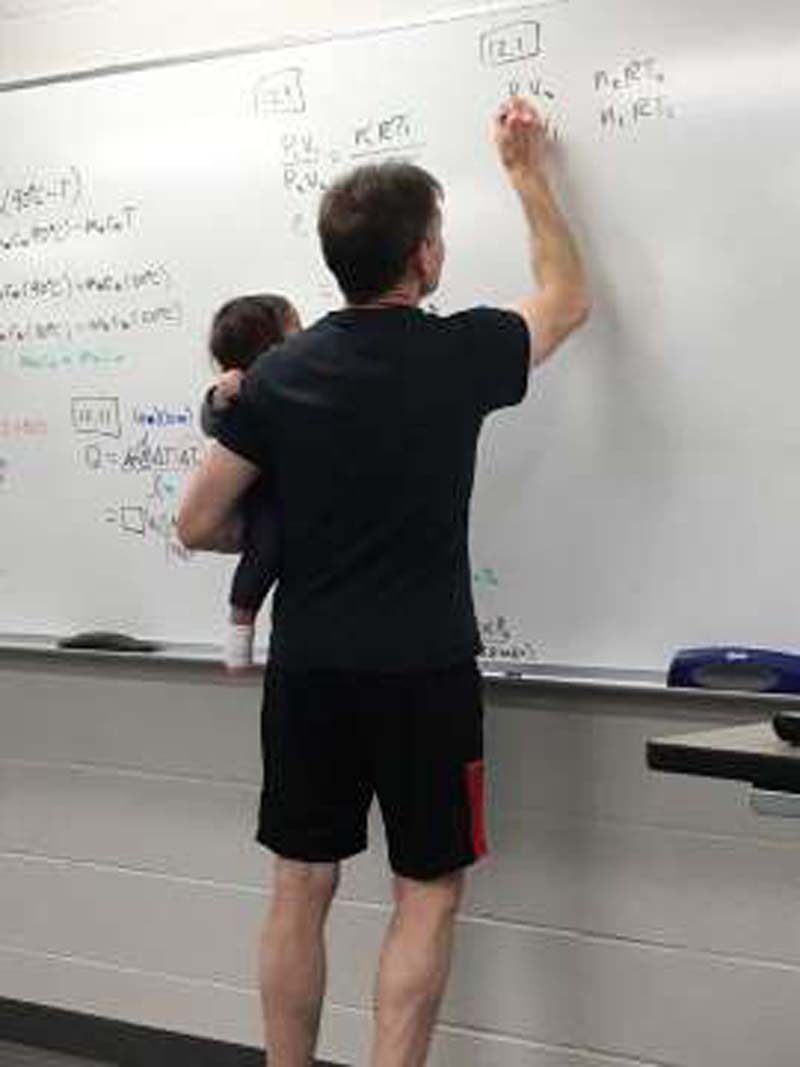