© Gary Middendorf/Chicago Tribune/TNS Gunner had to have his ear removed after sustaining a gunshot wound to the head in 2016… By Donna V...

It's a long journey from running solo on the mean streets of Chicago to settling in with a family, especially when you're carrying the baggage of gunshot trauma.

Yet, Gunner, the Siberian husky that was rescued from Chicago's southwest side after being shot in the head in 2016, is on his way to becoming a therapy dog.

Missing an ear, "He's doing well," said his adoptive owner Noel Dagley. "It was kind of a long process, though. He had some behavioral issues that we had to work through. And we also had to work through him getting used to me and other people touching around his ear and the area that the bullet went through."

Gunner had become so accustomed to fending for himself that it took some time for him to adapt to being in a house, said Dagley, who with her husband Mike runs Adopt A Husky, near the Illinois-Wisconsin border.

"I think he had been in a house environment at one time but I think because he was living on the street when we found him, he had learned to survive," she said. "We just had to get him back into the mode of understanding 'you don't have to survive on your own; you've got a family now.'"

After volunteers at Peoples Animal Welfare Society (PAWS) in Tinley Park sought medical care for Gunner's wounds, they reached out to the husky adoption group for help finding a permanent home.

"Gunner was just a little too wild," Dagley said. So she ended up taking him in.

Dagley said she introduced the canine to sports and agility training. He competes these days and both activities have helped with behavioral issues, she said.

"He started sledding a couple months after we got him," she said. He took over the lead role his first year but this past season he sometimes led and sometimes took a team position, relinquishing the lead to his adopted little sister, Spirit.

In June of 2016, Gunner was plucked off the streets near 63rd and Western in Chicago by a South Side resident who regularly trolls some of the city's toughest areas looking for lost, sick and injured pets. Because of the late hour, the rescuer contacted friends at PAWS in Tinley Park.

The dog was taken to an emergency veterinary clinic in Mokena where his wounds were cleaned and treated. The next day he was transferred to Midwest Animal Hospital in Orland Park. There, doctors performed surgery to remove the ear and treated him with antibiotics to fend off infection.

All PAWS has since taken in other dogs injured by gunshots, Gunner remains its most severe victim, said Vicki Dean, second vice president.

He has a special place in her heart, Dean said.

"He was so gentle that night. He never tried to bite anyone although his wounds were bad," she said.

"We are so happy he is doing well and has a new purpose," she said. "We are so grateful that Adopt A Husky agreed to take him."

Dagley said though Gunner doesn't seem to suffer from Post Traumatic Stress Disorder from the incident, some issues did arise during a photo shoot.

"The photographer was taking the photos in a studio, with big flash bulbs that made a loud noise when they popped. He could not handle that," she said. He was curious at first, she said, but with each shot his anxiety increased until it got to the point where he had to get out of the room.

Dagley and her husband started their nonprofit in 1998 and have since "saved thousands of Siberians," she said.

"We are the largest in Midwest and one of the largest in the country. Because of that we are able to take medical cases and puppy mill shut downs and that is the reason Gunner came to us," Dagley said. "PAWS is the group that actually rescued him and got him the rehab he needed. But when it came time for adoption, they couldn't adopt him out because of his issues. So they called us and asked if we could take him and work with him.

"We do get calls from all over the Midwest about dogs that have a lot of medical issues, whether they've been hit by a car or have deformities that need extensive surgeries. They usually call us because we have the capacity to help with that," she said.

The group typically has 40 or more dogs in foster care at a time, with a continual waiting list, she said.

Fundraising events help pay for the care they provide, she said.

"Our biggest event is at Morton Arboretum the last weekend in January. I usually have 50-75 huskies there," she said. But the group also does a husky demonstration in the south suburbs each winter, too. 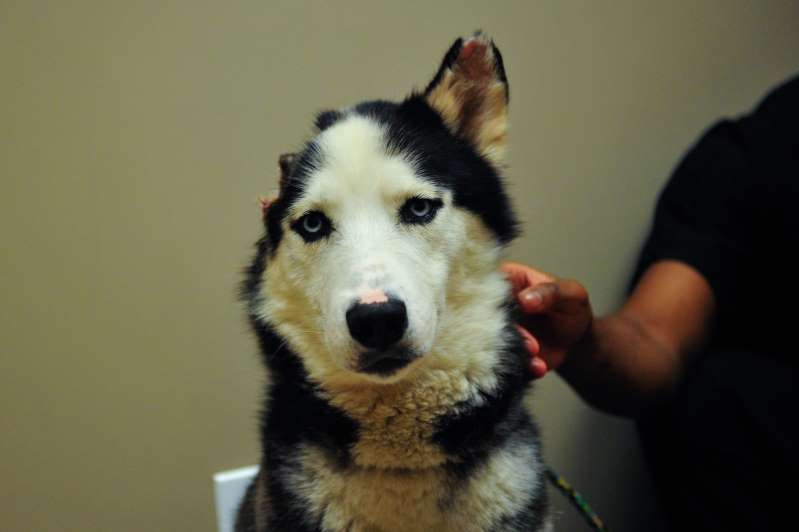