Jack Rummler was in the hospital for yet another surgery — this one on his knee — but he kept emailing his journalism teacher and his classmates at Boone High School. The then-10th grader wanted to stay on top of his newspaper assignments and didn't want anyone else stuck with work he'd taken on.

"He would be in the hospital writing stories," said Renee Burke, his teacher at the time. "He had other things he should be worried about," she added. "He wouldn't stop worrying about us."

Rummler, 18, said he didn't stop worrying because he enjoyed high school journalism so much. "Every little nitty-gritty aspect of it."

He is set to graduate from Boone next week, one of more than 24,000 teenagers in Lake, Orange, Osceola and Seminole earning diplomas this spring.

He is a compassionate student, Burke said, who always seems to be thinking about others on campus and in the community, even when he faces his own challenges.

Born with spina bifida, a defect of the spinal cord, the Orange County teenager has had about a dozen surgeries and dealt with serious medical complications because nerves that supply some internal organs, including his kidneys, don't work property. Two years ago, medical problems kept him out of school for weeks. He walks with a limp.

Yet he never wanted any special accommodations, Burke said, nor did he avoid assignments that might be physically challenging for him, such as filming Boone football games. During his four years of high school, he worked his way up from staff member to editor-in-chief of the Boone paper.

Last month, he won the "student journalist of the year" award from the Florida Scholastic Press Association.

The contest required student journalists to put together an online portfolio showcasing examples of their work and their ability to be "backpack journalists" who could tackle many types of assignments. Rummler's included stories and opinion pieces, a graphic he'd designed about school construction, a TV commercial for the paper's online site, and another reporter's story that he had edited.

One of the judges wrote that Rummler's portfolio displayed his "skills as a 21st century journalist who can do it all."

As a ninth-grader, Rummler signed up for a journalism class because he wanted to write. "I always just had a passion for words," he said.

But he found he liked photography, design and doing multimedia work, too, as well as writing about campus events and giving his views on current issues.

"I think one of the things that journalism taught me is to be always aware of what's going on in the world," he said.

The Boone paper, Hilights, publishes in print four times a year and also online. The last issue he worked on was about graduation, showcasing the accomplishments of valedictorians and top athletes, among other soon-to-be graduates. As usual, he was stressed, and excited, as publication time neared.

"I can't wait to see what it looks like when it comes out."

Burke, who taught him for three years, said Rummler was the type of student who genuinely seemed more interested in learning than in his grades, though he was always an excellent student.

"That's a quality, as a teacher, I love," added Burke, who is now media promotions manager for the Orange County school district.

Rummler's spina bifida-related health problems in 10th grade proved particularly difficult. He needed knee surgery and then kept getting seriously ill. Eventually, he was diagnosed with prostate stones, which required laser treatments. He missed some 20 days of school, he said, leaving him lots of work to catch up on as well as his newspaper assignments to tackle.

"It really threw me off," he said of his illness. "I was always stressed about it," he added. "I get very caught up in, I have to do this and this."

But he managed to complete it all. And for the next two years, he was named a co-editor-in-chief of the Boone paper.

Marc Rummler, Jack's father, said his son always seemed to determined to get work done, even as the complications from spina bifida sometimes led to emergency room visits and surgergies.

Jack ran track in middle school, despite his mobility problems, competing in the 800-meter event. That required running twice around the track, and other runners often finished a lap ahead of him.

Marc Rummler said when he watched the first meet, he was worried his son would be embarrassed that everyone else finished so far ahead of him. But Jack finished "with the biggest smile on his face" because he'd beaten his own best time, his father said. "He knew he'd finish last," he added, but he focused on his own hard work and his own improvement.

In August, Rummler will start at the University of Florida, where he plans to major in environmental sustainability and possibly minor in communications.

"Whatever he does, he's going to be great at it," said Bridgette Norris, the current journalism teacher at Boone who taught him this past school year.

In class, Norris said, "Jack's definitely a quiet leader," someone younger students look to for help and admire for his dedication. He was often in her classroom during lunch and at the end of the day, working on the paper.

And when he needed another surgery this school year, she also found he wouldn't use that as a reason not to meet his deadlines.

"I was trying to give him a little extra time," Norris said. 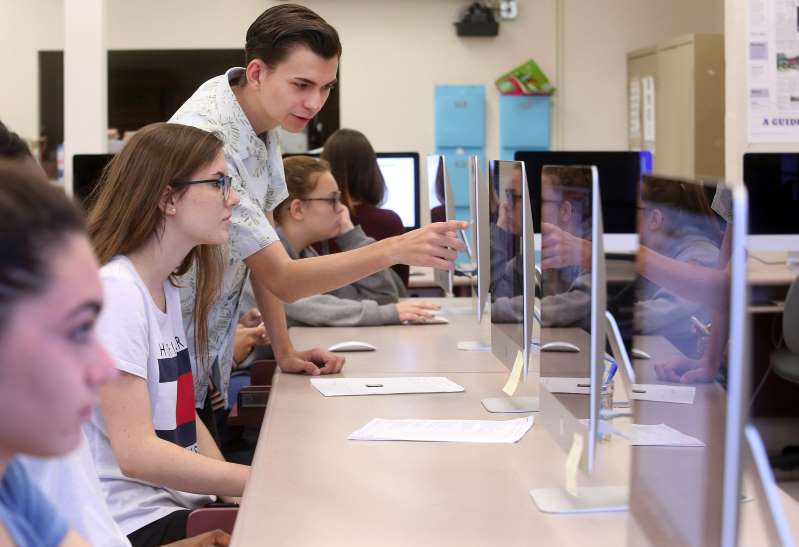