If there's one thing Donal L. Russell loves most, it's being outdoors.

For nearly four decades, the 94-year-old retiree traveled the state by airplane as a wildlands firefighter. And at the Escondido, Calif., retirement home where Russell now lives, he can reliably be found on the patio each day enjoying the sunshine.

So when he was offered the chance recently to take a ride in a 1929 biplane, he was thrilled at the chance to thread the clouds once again.

Back in his firefighting days, Russell often rode in a biplane on "seeding" missions, where he'd fly over burned areas dropping pounds of groundcover seeds in hopes that the new plant roots would stabilize the soil to fend off mudslides.

But Russell retired in 1974, so it's been a long time since he has been able to enjoy the exhilaration of the open cockpit.

"I'm not at all afraid of going up," he said Thursday during a pre-flight orientation at Fun Flights Biplane Rides at McClellan-Palomar Airport in Carlsbad. "I love being outdoors and I love flying."

Russell lives at Cypress Court retirement community in Escondido, where wellness director Judy Lucous runs the "Dreams Do Come True" program. Every few months, she surprises a different resident with a bucket-list wish. Past wish grants have included the chance to ride a bicycle again, go up in a hot-air balloon or spend an afternoon shopping at the mall.

Lucous said Russell didn't request the biplane ride, but after hearing about his high-flying career, she thought it would be an experience he would enjoy. And he clearly did.

Although he uses a walker to get around, Russell virtually sprinted on his way to the airplane hangar.

"This is tremendous," he said before climbing into the plane's tight passenger compartment with the agility of a man in his 60s.

Russell rode in the airplane with his son, Donal S. Russell, 69, of Capistrano Beach. It was piloted by Brian "Biggles" Shepherd, who bought the 1929 Travel Air B-4000 airplane with his wife, Janene, in 2013. They launched Fun Flights a year later.

The three-seat airplane, one of just 40 of its kind still flying today, cruises at an altitude of 1,500 feet and travels about 85 miles an hour, which Shepherd said feels like "riding down the freeway with the top down."

The London-born pilot came to the U.S. in 1970 as a talent scout for Capitol Records but quit the music business in his 40s to fly planes. Although he spent many years piloting private jets, he prefers the simplicity of biplanes.

"This is real flying," he said. "There's nothing automated in this plane. It's all stick and rudder."

After the half-hour flight, which traveled down the North County coast, Russell was over the moon about the experience.

"It was outstanding, it was thrilling, it was wonderful, it was great," he said. "I'm so grateful for what Judy and everyone did to make it happen."

Russell was born into a ranching family on Sept. 23, 1924, in Long Beach. When he was in high school, a family friend gave him a part-time office job answering phones overnight at what's now the California Department of Forestry and Fire Protection. After high school, he became a firefighter and retired 36 years later as a division chief.

The job required him to fly all over the state battling fires. Most times, the firefighters traveled in a DC-3, but for seeding operations, they rode in biplanes, which was one of Russell's favorite jobs.

For most of his career, Russell lived in Ramona. He and his wife, who died in 2003, had four sons together, two of whom served in the military. His son Donal, who has a twin brother, Dan, said his father has thrived in recent years in the companionship of friends at Cypress Court.

He credits his dad's longevity to "living life right." But his father said he has his own secret elixir. 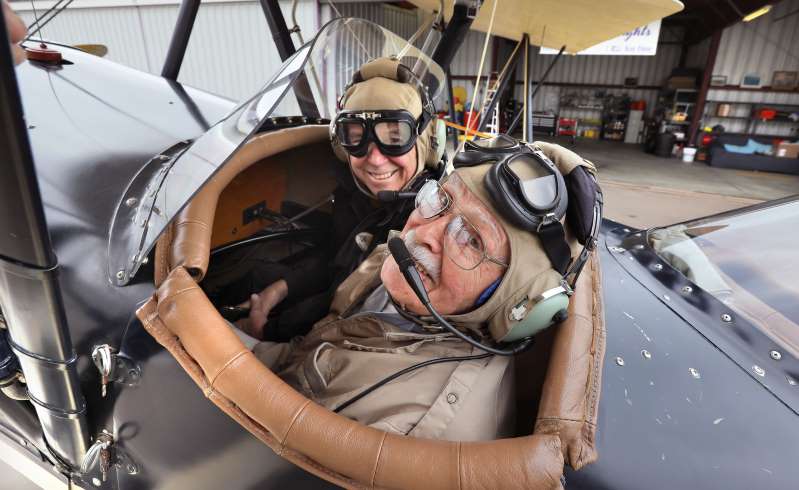