Rosalyn Baldwin, 8, is on an important mission. She travels all across the United States, hugging as many police officers as she can. Rosalyn, who lives in Louisiana, has visited 27 states so far and hugged countless police officers.

She and her mother started the project after several police officers in Dallas were killed in 2016. "Basically it was the shootings in Dallas that broke her heart," Angie Baldwin told WKRC-TV. "She said, 'Momma, they're killing our heroes.' And then when it happened in Baton Rouge it was very personal to her."

A Houston officer who met Rosalyn says she "recharged their batteries" and made them feel loved. Officers across the U.S. agree. Rosalyn often shows up at police departments during sad times. She visited Cincinnati this week as the department honored officers who had died in the line of duty.

"To have a young person like that really just share that love that she has for police officers, it really warms our hearts especially on a day like this when we are remembering those that we've lost," Chief Eliot Isaac said during Rosalyn's visit.

"It's a great feeling, knowing that someone that you don't even know is reaching out to you and just bringing love to everything," Officer Ken Grubbs told WKRC-TV. When Rosalyn was told that Grubbs was shot last year in the line of duty, she took his hand and prayed for him.

Rosalyn has made stops all over the U.S., including a trip to Ferguson, Missouri, during protests over police officer-involved shootings. Rosalyn's mom says she helps build bridges between the community and the police officers who serve them.

Rosalyn explained her decision to go on this mission across the country. "I didn't decide, God decided." 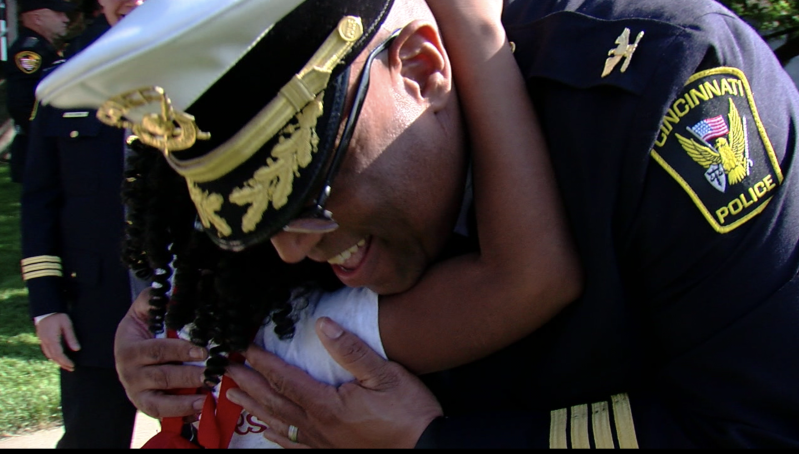