© Provided by Hearst Communications, Inc A woman is safe and in stable condition after being swept away in flood waters Sunday night, May 20...

After San Antonio firefighters and police rescued a woman who was swept away by floodwaters Sunday evening, Spectrum News reporter Sarah Duran saw a small figure struggling in the water.

Most of the rescue personnel had gone, leaving a few members of the media, including San Antonio Express-News reporter Alexandro Luna, who were working on their stories. Duran said she was shooting some footage of the water when the dog popped up.

"I was like, oh my God, guys! I think there is a dog in the water," Duran explained. "I thought it was actually a water bottle but no, I noticed he had little eyes and it was a dog!"

The puppy was struggling in the water and members of the media then alerted the lone police officer still at the scene, who was in his cruiser nearby.

San Antonio Park Police Officer David Ramirez brought rope over and attempted to lasso the dog, who had made its way to the drainage area where the people were gathered.

Attempts to get the dog were unsuccessful. So other methods were employed.

"He pointed to Alex and was like - you! You want to get down there," Duran said.

"You! You're thin," Luna said recalling how he was drafted into the rescue effort.

Ramirez tied the rope around Luna and he and the other media members then lowered Luna down to the water here he retrieved the dog.

"Seeing that poor little guy in the water was heart-breaking! It made me happy to see everyone come together to rescue him," Luna later said.

Ramirez said the dog would be given to Animal Care Services. 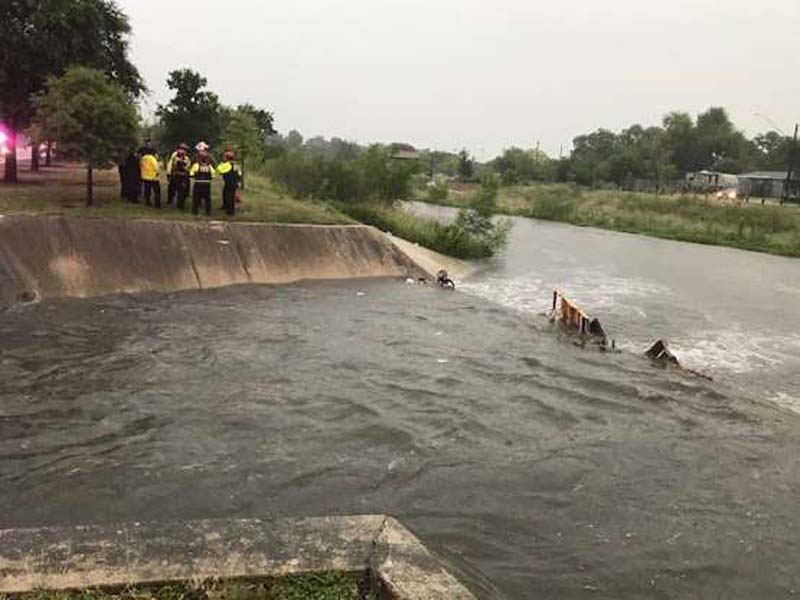