© Getty Photos depicting the funeral for the father of three, who was posthumously awarded the department's highest honor, the Medal… F...

One of the New York Police Department’s newest recruits is carrying on the legacy of her father, who died protecting others during the terrorist attack on the World Trade Center on Sept. 11, 2001.

Jillian Suarez, 25, was one of 270 police recruits who took the Oath of Honor at the NYPD Police Academy last Thursday.

Suarez was just 9 years old when her father, Officer Ramon Suarez, was killed during rescue efforts at the Twin Towers during the 9/11 attacks.

Suarez had carried out a woman who collapsed with asthma and was last seen heading back into the towers to rescue others.

He and his partner were both killed that day.

Photos depicting the funeral for the father of three, who was posthumously awarded the NYPD's highest honor, the Medal of Honor, showed his daughter Jillian wearing her father's eight-point police cap.

"I grew up with my father walking in and out of the house with his uniform constantly on and I always admired him for that… he truly loved his job," Jillian Suarez said in an NYPD statement.

Seventeen years later, Jillian Suarez has decided to carry on her father's legacy by joining the NYPD herself.

Jillian Suarez, who majored in homeland security and criminal justice in leadership at St. John's University, will undergo six months of training before hitting the streets as an NYPD officer.

"Jillian is well prepared for the challenges of a career in law enforcement," the NYPD said. "Upon graduating from the Police Academy, Jillian hopes to carry her father’s shield, and with it, a deep sense of pride and purpose." 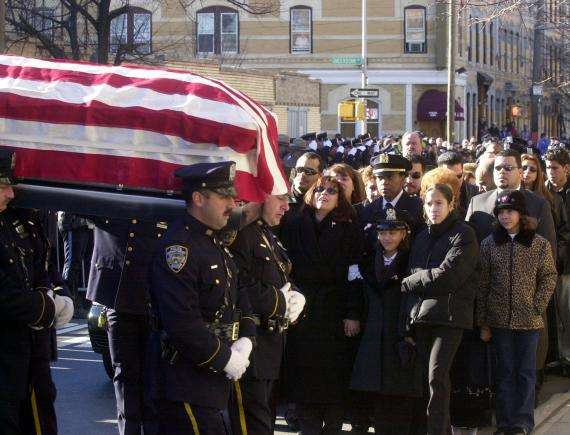