Chicago kids bake for social justice: 'We want to live in a world that isn't broken'

Once a month, deterred by neither snow nor rain nor heat nor gloom of the latest headlines, a dozen or so kids fill a table with baked goods, festoon it with socially conscious signs and watch with joy in their hearts as the donations pour in.

They call it Bake Sale for Justice, and they've been gathering outside a Chicago Women & Children First bookstore since November 2016. They offer homemade or bakery-donated items with a "pay what you want, take what you want" policy that, as it turns out, really adds up.

The mostly 11- and 12-year-olds say they've raised $13,000 so far, which they've donated to such organizations as Refugee One, the American Civil Liberties Union, the Environmental Defense Fund, the Union of Concerned Scientists and the Native American Rights Fund.

"After the results of the November 2016 election, my mom and I wanted to do something to help," Nora Fox, 11, said. "The original idea was to do a bake sale in somebody's backyard."

Fox and her mom, Anne Fogarty, figured they'd raise $50 or so. They planned to send it to the ACLU, which promised to fight some of the measures President Donald Trump had pledged to enact during his campaign, namely a travel ban against Muslims, that struck Fox and Fogarty as unjust.

A family friend suggested Fox and her friends set up outside Women & Children First. The store owners were all for it, and the group raised more than $800 that first day.

They decided to turn Bake Sale for Justice into a monthly event. They set up a Facebook page to solicit donations (baked goods and money) and share photos. They spread the word among friends. They tracked down recipes. They researched organizations that matched their mission.

"We try to find groups that fit under the umbrella of justice," Fogarty said. "Social justice, environmental justice, racial justice. We want to raise money to support a specific community that feels under attack."

Often the organizations will contact the group after receiving a donation.

"We are so impressed that these young children are getting involved and trying to do something about a situation they see as being very negative and destructive," Donald Ragona, director of development at the Native American Rights Fund, wrote in a thank-you letter. "They could have sat back and accepted what was going on in the world around them, but instead they chose to become involved and do something positive and meaningful to lessen the effects of the negativity and divisiveness."

Union of Concerned Scientists stopped by the bake sale with thank-you tote bags. Habitat for Humanity Puerto Rico shared photos of the kids on its Facebook page. A Human Rights Campaign staffer met with the bakers at the office of Ald. Harry Osterman, 48th.

"It can be hard to make a difference because of our age," Faelyn McGuire, 11, said. "If you try to volunteer, it's like '14 and up,' and we're all 11 or 12 or even younger. We can't vote. We're old enough to want to help but not old enough to be considered mature enough to help."

The bake sales have proved a perfect conduit. And for the most part, they've been received warmly.

"One time, we had a person who thought we were protesting the bookstore," Fox said. "That was funny."

Two of the older girls - Whitney Young eighth-graders Tova Love Kaplan and Carlotta Harold - said passers-by once engaged them in a gun control debate when they were raising money for March for Our Lives, which advocates for universal background checks and an assault weapons ban.

"You held your own," Fogarty told them.

Harold and Kaplan just got permission from Whitney Young to start a Bake Sale for Justice club next school year.

"It will be a physical bake sale, but also work on educating people," Kaplan, 14, said. "What are these organizations, what's going on in the world around us. Because we don't live in a bubble."

I spent a recent afternoon in Harold's North Side living room with 20 or so girls, two boys and a handful of moms who make Bake Sale for Justice happen. I asked them what they say to their inevitable detractors, the ones who say they're too young to have informed opinions about politics and the world around them. The ones who say their parents must be brainwashing them.

"Noooooooooooo!" they yelled in unison.

"You hear so many people say, 'You're only a kid - you can't make that much of a difference,' " Madeline Owens, 12, said. "Once I joined Bake Sale for Justice, I felt more hopeful that everyone can make a difference."

They see their activism as simply a part of their childhood.

"I'm channeling my aggressive Girl Scouts cookie skills into Bake Sale for Justice," Kaplan said. "If they make eye contact with me, they're going to buy something. It feels good. We've raised a lot of money. We've done a lot of good. We've inspired a lot of people."

That's what Audrey Bingle, 11, wants her generation to be known for.

"I'm really proud that we're educating ourselves and educating others," Bingle said. "I'm really excited to be the generation that will help there be less violence and hate."

The next bake sale is scheduled for May 20. Fogarty is researching organizations that are working to clean up the water in Flint, Mich.

"We want to live in a world that isn't broken," Bingle said. "We want to heal it instead of break it apart further." 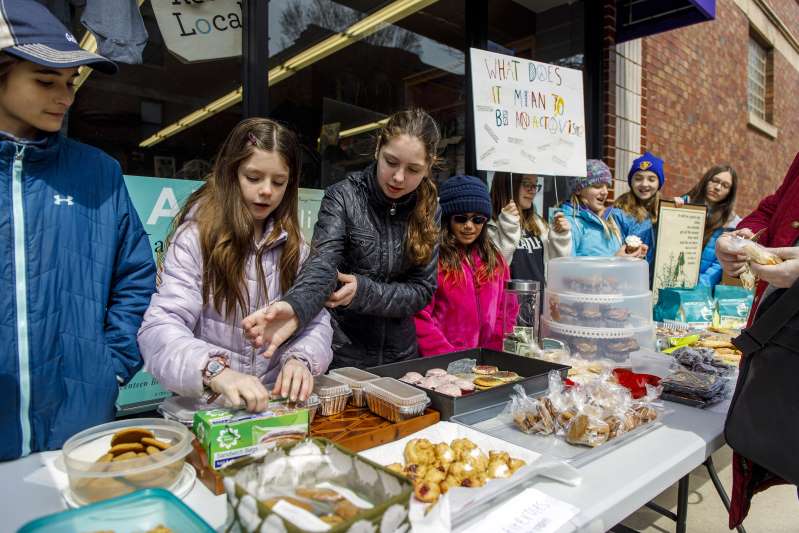