© Sarah Espedido/Orlando Sentinel/TNS Irene Dominque has been accepted into 20 colleges, and has decided to attend FSU. As a first generat...

When Irene Dominque of Apopka, Fla., heads off to Florida State this summer, she won't just be the first in her family to go to college. After moving an average of twice a year throughout her childhood, living two years in a motel and working two jobs in her senior year, she'll be the first to have graduated high school.

"At first, I thought, 'How am I going to pay for college? Why am I even applying?' " said Dominque, 18, a senior, who now has a full four-year scholarship to FSU. "My test scores at the time were kind of low, and I worried I would get rejected. Then I met Ms. Suzanne."

Suzanne Dukes, 55, is officially the college access consultant for the Boys & Girls Clubs of Central Florida — a position she created after 14 years as a volunteer and sending two kids of her own off to Harvard. The young people she helps describe her as a coach, counselor, confidante and visionary, able to see possibilities for them that they cannot yet grasp for themselves.

"Applying for college is really complicated now, particularly if you're looking for any kind of financial aid," Dukes said. "I realized that if it was hard for my daughters, who had every advantage, it must seem overwhelming to these kids, most of whom have no one in their family with the experience or time to guide them through the process."

This month, the program she started four years ago will produce its first seven graduates — including two from Rollins College and one from Spelman, the historically black liberal arts school for women in Atlanta. And she is preparing to send 40 more students on to various colleges this fall.

Each year, she holds group meetings with high-school juniors at 15 Boys & Girls Clubs in Central Florida to explain the college application timeline and what she can offer, but it's up to the students where it goes from there. If they want her help and do their part — researching schools and majors, gathering information, writing essays — Dukes will do everything she can, including meeting weekly one-on-one and emailing in between those visits throughout much of the next year.

"Most of the time, people have perfunctory attitudes about youth and their future. But Ms. Suzanne always came in and devoted herself. She made sure she helped us as much as possible — not just me, but all of us," said Ja'Keevious Mack, 18, a senior. "I would say before Ms. Suzanne came in, I wasn't necessarily focusing on college like I should have been."

In December 2016, just after Christmas, his 24-year-old brother, Je'Vonte, was found dead by a roadside.

"Just in an instance, just like that, I saw how your whole life can change," Mack said. "I stopped coming to the 1/8Boys & Girls3/8 Club. Actually, I stopped everything. My grades in school began to drop. I could barely go outside. ... Nothing mattered anymore. I was 16 years old, and at that point in my life, I had more family members, friends and neighbors than I can even count get thrown into prison, and my brother was murdered and left by the side of the road by people he thought were his friends. Why was I still dreaming? What did it even matter what happened to me?"

When his Eatonville, Fla., club director noticed his extended absence, he called and insisted Mack come in. The director arranged for a math tutor, and another club leader counseled him. They also introduced him to Dukes, who worked with Mack over the following year to help him stay focused, scout out colleges and apply for financial aid.

He is now headed to Rollins on a full scholarship to pursue law and politics. He too will be the first in his family to go to college.

"I am just so ecstatic with how far he has come and all the things he has overcome," said his mother, LaCosha Mack, a housekeeper who began taking her son to the Boys & Girls Club when he was 6. "The club really helped me with him, because at the time I was just grieving real bad."

Dukes' goal is not to send every child to college. It's to find out each one's hopes and talents and find the best fit, whether that is college, trade school or the military. It's a lesson she learned personally — starting out as a pre-med student at Tulane University before an internship in her junior year.

"I ended up spending most of my time crying with patients," she said. "I realized that wasn't going to work."

She changed course, earning a master's in health administration. "But I probably should have been a teacher," she said.

Now her students include Debora Cordero, 18, a member of the Tupperware Brands Boys & Girls Club in Kissimmee, Fla., who earned offers of full scholarships from several prestigious schools, including Duke University, where Cordero will start late this summer. A nationally recognized artist and top scholar, Cordero is keeping her options open.

"I'm going to go the pre-med route for now — with a major in biology, focusing on anatomy, and a minor in fine arts," she said. "I see myself as a surgeon, but the years of school required to get there — I don't know yet. Maybe I'll have a career in science with art on the side."

When Dukes began her mission, she figured it would be simply a matter of helping to fill out applications and proof-reading essays. Now, despite her part-time salary, she often works full time, helping to arrange tutors so students can bolster their SAT scores, researching scholarship opportunities and developing partnerships with Valencia and Rollins colleges. She also stays in touch once students have gone to college to make sure they're OK. But the kids do the hard part.

"I'll be bugging them to finish their application essays, and then I find out they didn't have anything to eat all weekend," she said.

Gary Cain, president and CEO of the Boys & Girls Clubs of Central Florida, said the college initiative has pushed club members to another level. "Now the kids are starting to have peers that go to college," he said. "And if they can see that it's possible, it's all the more likely that they'll believe it can happen in their own lives too."

For Dominque, the biggest change has been her self-confidence, she said. Although she was already a top student, her college aptitude scores lagged, so Dukes encouraged her to study and retake them. The results got the young woman several scholarship offers, including the one at FSU, where she'll study biology, hoping to get into medical school.

"If not for Ms. Suzanne believing in me and saying, 'Your obstacles do not define you,' I might have given up," Dominque said. "But you learn that there is more to life than what you see now. You learn that hard work really does pay off." 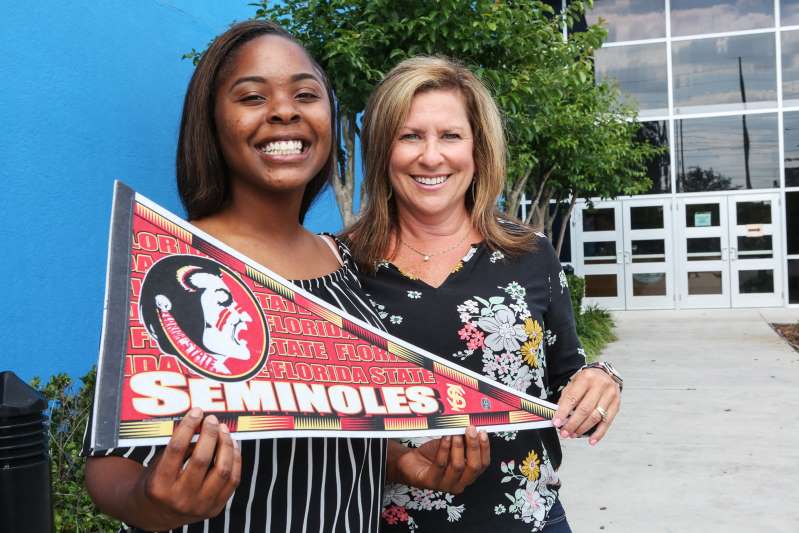