'A book by someone like them': Refugee and immigrant girls meet author with a story similar to their own

Chapter 1: We were scattered, an unsettling feeling in such an uncertain time. For weeks I had been dreaming of home - our big yellow-brick house with a grass-green roof, filled with cousins and friends.

The book club began meeting just a few weeks ago - a dozen west suburban girls already linked by their shared experience as refugees and immigrants, together eagerly turning the pages of a narrative that in so many ways mirrored their own.

Their teacher at Hadley Junior High School in Glen Ellyn introduced them to their first communal book, "How Dare the Sun Rise: Memoirs of a War Child." Then they connected on Twitter and Instagram with author Sandra Uwiringiyimana, sending a picture of the group and writing back and forth, expressing how much they loved her story of fleeing the Democratic Republic of the Congo and resettling in the United States as a refugee during middle school.

And when the teacher and students invited the New York writer to visit and speak at their school, she replied within five minutes: Yes, I'd love to come.

On Thursday, the 12 girls gathered in a circle for a special book club session, led by Uwiringiyimana.

That scene in the school library provided a quiet moment of understanding amid a backdrop of intense national backlash against those seeking haven in the United States, from recent federal travel bans to moratoriums on refugee resettlement to derogatory comments reportedly made by President Donald Trump earlier this year regarding African nations, Haiti and El Salvador.

The girls and the writer talked of learning English and trying to assimilate while still missing their homelands. They discussed struggling with unanswered questions about the turmoil and suffering that continues in the countries where they were born.

And the students spoke of how they connected to "How Dare the Sun Rise," co-authored by journalist Abigail Pesta. The book stirred memories like interviewing at the United Nations, fearing a first trip on an airplane, teaching parents about American culture and struggling for words in a non-native tongue.

As the girls clutched their copies of her memoir - which recently made the Chicago Public Library's Best of the Best Books for Teens list - 23-year-old Uwiringiyimana asked what they would change about their own experience arriving here.

"To be normal," a third girl answered.

Uwiringiyimana nodded. And she often described similar emotions during speeches to their classmates throughout the school day.

"It was feeling like you didn't belong in this place. ... You're here now and things are supposed to be better," she said during one speech. "But just because you're resettled, that doesn't mean that you forget everything that you've just been through."

Chapter 16: Those first days of school were a perplexing blur, but I remember the feeling clearly: pure misery. I looked different from the other students with my buzz-cut hair and used clothes, and I wanted desperately to blend in.

The book club girls were a flurry of questions as they prepared for the arrival of the writer, who by then had become a bit of a celebrity to them:

Who was her role model? How did she make friends? What was her dream as a child? What kind of movies and music and television shows does she like?

They nervously practiced brief speeches they wrote to introduce her to their classmates.

And they repeated Uw-ir-ing-i-yi-ma-na over and over again, trying to pronounce the author's name just right.

"This is your thing, own it," their English as a second language teacher, Katie Luehrs, kept telling them as they decorated the school library with photos of the author and a homemade welcome banner.

Luehrs was so moved after reading "How Dare the Sun Rise" that she had to share it with the girls, all English language learners, so she formed the book club in March. More than half of the seventh- and eighth-graders in the club are refugees, and almost all are immigrants.

"I wanted them to have a strong, independent female role model," she said, "somebody who's an immigrant and a minority, somebody that came here and didn't speak any English at their age. ... They need to read a book by someone like them."

Then the girls started reading ahead of the group. A few teared up at the most sorrowful chapters. They even met at the Glen Ellyn Public Library while on spring break, to avoid missing a book club session during the vacation.

The school bought copies of the book for each of the girls and a local nonprofit, the Glen Ellyn Children's Resource Center, raised funds to pay for the author's travel, meals and accommodations.

For Smriti Aryal, a refugee from Nepal, the book club provides a space to share common struggles without explanation or embarrassment.

"I don't know the word - empathy?" she said. "You can share your feelings with them."

And the memoir soon spurred new conversations, during book club sessions as well as at home.

Madaleno Ayti shared the story with her father, who began talking more about the life and relatives they left behind in Ethiopia, amid the Ethiopian-Eritrean border clash.

Many mentioned longing to return and visit the villages where they were born and raised.

Ngun Eng said she wants to become a doctor, perhaps an anesthesiologist, and help provide treatment back in Myanmar (formerly Burma), where minority groups are often denied medical care.

Diljot Kaur hopes to be a lawyer or a judge, one day going back to her village in India to establish schools.

Jenny Sui Par, a Burmese refugee, recalled her childhood in Malaysia, where she and other children weren't allowed to play outside for fear of kidnapping by traffickers.

"I can relate," Sui Par said of the book. "My family came here to have a happy life too."

Chapter 28: I had experienced nightmares in the past, but they began to grow stronger - shattering images flooding back from the massacre. I would wake up screaming.

As Uwiringiyimana spoke to about three dozen students in the school library, the book club girls sat in the back two rows, occasionally nodding or smiling softly.

"I meet communities who are like, 'Oh Sandra, you're so brave for sharing,'" she said. "But they also happen to be the same communities that have refugees but don't reach out to them, don't ask them how they are and how they got here."

A few years ago, she said, she wasn't an author traveling and speaking to crowds about her journey.

"I was just a kid in Rochester, N.Y., struggling to fit in, just dying for someone to approach me and include me and make me feel welcome," she said. "Something as simple as just sitting with someone at lunch and making them feel that you really care that they're here, that they're alive, that could mean so much. There's probably like 10 Sandras in your community."

The girls in the book club are aware of some of the political resistance to immigrants and refugees on a national level. Roughly 10,500 refugees entered the United States from Oct. 1, 2017, to March 31, 2018, a drastic decrease from 39,100 during the same period a year earlier, according to the Pew Research Center.

"It kind of bothers me," she said. "You can make it here, but there's so many that can't make it to a better place."

The girls in the book club talk about what they hope their classmates will learn from Uwiringiyimana's talks.

"Not everyone has an easy life," one said.

"To not judge, you don't know what everyone is going through," another girl added.

One classmate raised her hand after Uwiringiyimana's speech, asking what message she would share with young people.

"You're much more powerful than you think," the author said. "You can forge a lot of conversations, help open up ... minds, and educate them about things they wouldn't otherwise know." 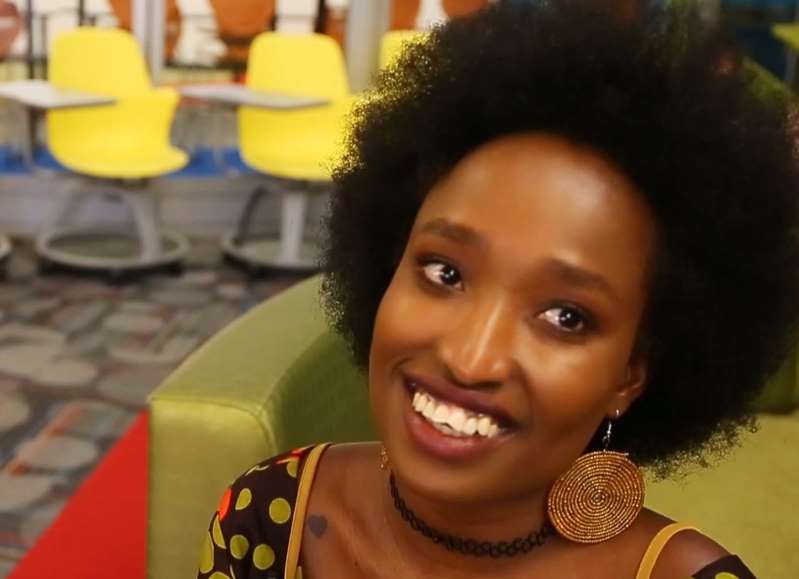