At 87, this Baltimore inventor has 250 patents to his name — and he's still at it

Before becoming a lauded inventor of one of the most pivotal technological devices of our time, James "Jim" E. West said, his journey started simply — with curiosity. Gadgets with screws or nuts — including his grandfather's pocket watch — were often endangered because West wanted to learn their inner workings, and with pliers or screwdriver in hand, he would take them apart.

If it was broken, "it was mine to do whatever I wanted with it," said West, an acoustician and professor of engineering at the Johns Hopkins University. "Curiosity has always been my motivation."

Today, the curiosity of the 87-year-old award-winning inventor, with more than 250 patents to his name (he's stopped counting, he said), remains as fervent as ever, but instead of breaking things, West said, he is dedicated to fixing them and inventing technology that makes human life better, while also ensuring that STEM industries represent our diverse world.

The National Inventors Hall of Fame inductee, who lives in Fells Point, got his start at Bell Laboratories in Murray Hill, N.J., where he and his then-business partner, Gerhard M. Sessler, created and patented the foil-electret microphone in 1962. The device, which took around four years to create, is now in 90 percent of devices that feature microphones, including hearing aids, baby monitors, audio recording devices, and a majority of smartphones and telephones.

But West, who is African-American, said growing up with hopes of being a scientist wasn't easy. There weren't many black men or women to whom he could look as role models. The disparities still exist today, he said.

According to the National Science Foundation's Center for Science and Engineering Statistics, about 7 percent of employed scientists and engineers in the U.S. were black or African-American in 2015, compared to about 13 percent of the population reported by the U.S. Census Bureau in 2015.

"There's a fundamental problem in this country that many of us are very concerned about, and there is concrete proof that diversity in STEM and science is really important," West said.

In fact, a 2014 Harvard University study found that research papers written by diverse groups were published in "higher-impact journals" and received more citations than those written by people of the same ethnic group, leading the study's researchers to infer that diversity often "leads to greater contributions to science."

"My main interest is to teach the importance of STEM to our youth, because that's the only way it's going to change," said West. "We all know that role models are the real reason we do anything."

Growing up in Farmville, Va., West's parents raised him in hopes he'd become a doctor. When he showed a preference for the physical sciences over biology, it made his father uneasy, he said.

"At the time, the only opportunities for black people 1/8were3/8 a preacher, teacher, lawyer or a doctor. If you weren't one of those, forget it," West said. "It's very understandable that my father thought I was going the long route to working in the post office."

But after graduating from Temple University in Philadelphia in 1957 with a degree in physics, West fielded multiple job offers and chose Bell Labs because of the company's diversity, a rarity in the field.

There, he worked his way from technical aide to a high-ranking Bell Labs Fellow. When he and Sessler created the electret microphone it was assumed that the partners would quit their jobs and create a business mass-producing the microphones for companies around the world, but West wasn't interested.

"Why would we go off and make microphones, when we're like a 12-year-old kid in a sandbox with every toy he could ever imagine to play with?" West remembers thinking. By the late 1960s, the microphone was in mass production, with companies like Sony on board. "I wanted to keep doing what I was doing. ... I've never done anything for money. I do what I love to do."

Decades later, West's 31-year-old daughter, Ellington, wants to make sure he doesn't miss that opportunity again. West went on in 2001 to become a professor and faculty member at Hopkins, where he leads research and assists students and other scientists in major projects, including a digital stethoscope that will help detect a diseased lung within 10 seconds.

"When he was telling me about the programmable digital stethoscope, I thought, 'This is amazing. ... We cannot repeat what happened the first time,' " Ellington West said. She urged her father: "Take this to market and do something with it."

She's now the CEO of Sonavi Labs, which helped design and patent the stethoscope. They plan to put the device on the market in August and develop additional medical products.

The device will alert the user about whether further testing is needed with a red or green light, which would be especially helpful in developing countries, where accessing a doctor can be difficult and diseases like pneumonia — a leading cause of death of children under the age of 5 — are more common.

Young people have long been a focus for the award-winning inventor, who serves on the board of directors for The Ingenuity Project, a nonprofit that offers courses and real-world research opportunities in labs for local middle and high school students. He also assists with Camp Invention, a summer program that encourages interest in STEM among children in kindergarten through sixth grade.

"I'm like Lebron James when I walk in," he said with a laugh. "I get this feeling from the kids, because they are really excited about technology, excited about meeting people who are making a change, and they want to know how and why."

Lisette Morris, executive director of the Ingenuity Project, said that West has helped expand the number of students served and diversity within the program.

"He's found a lot of talent that doesn't always meet traditional standards, so we've been really pushed with his thinking on that," she said.

"He's not going to tell us how to approach the problem. ... We're offered the freedom to do it," said McLane, who has worked with West for more than six years. "That's one of the reasons I stayed on with him as a graduate student. ... He gives me a lot of space, and I'll come back two weeks later, and hopefully I have the answers."

McLane, who is gay, said he has also seen West's devotion to engaging underrepresented groups in STEM spill over into their lab, which is composed of a diverse cohort that also mentors visiting students of color from the city. It's West's hope to foster long-lasting relationships with the children, so that they can confidently pursue and stay in STEM, McLane said.

"He's a champion for diversity, and he's trying to lead by example," McLane said.

West's daughter calls him a "Black Panther type" with a quiet and unassuming eloquence.

"He's like this social justice renegade. He's allowed in these places where they think he has this complacent attitude," she said, but he shakes things up.

"I've never met someone who has better physical intuition than he has," she said. "Once he understands an issue and thinks about it, he'll pretty much always come in with an idea of how to address a challenge. He's not right 100 percent of the time, but while mere mortals might be right around 15 percent of the time, he's right 85 percent."

At 87, West is still looking to show himself up. The electret microphone, which is used by millions of people daily, "raises a challenge" for the inventor.

"Quite frankly, I want to put it out of business." 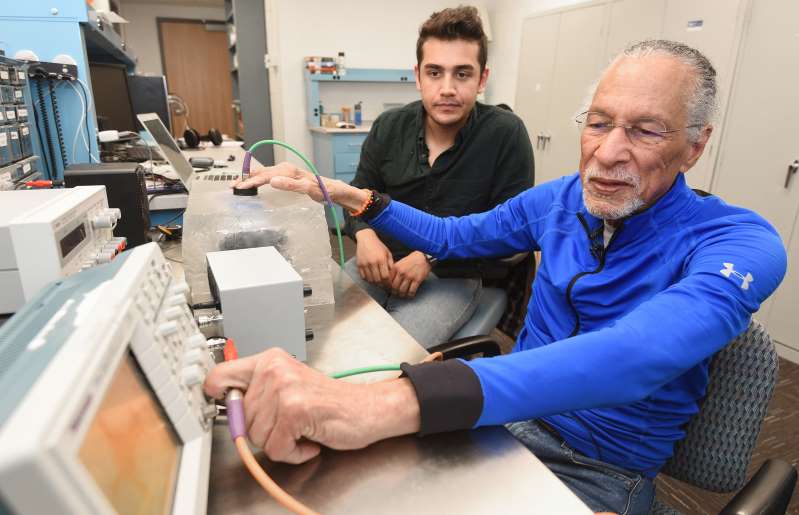