© Provided by Fox News Guido Filippone and Mike Gazella By Georeen Tanner, FOX News Semper Fi is the calling card of the U.S. Marines and o...

Semper Fi is the calling card of the U.S. Marines and one man carries the motto with him.

Guido Filippone, a Marine who served between 2004 and 2008, was leaving a VA appointment on May 16 when he noticed a man wearing a World War II baseball cap.

“I immediately approached him and thanked him for his service,” Filippone said.

It was a hot Texas day and Filippone was concerned about the man walking across the long stretch of parking lot—walker in tow—to return to his car.

“There was no one around with a golf cart to get him there faster.”

Filippone offered to escort him to his vehicle. During the walk, Filippone discovered the man was a World War II vet named Mike Gazella.

“We got to talking and he told me he was drafted into the Army and he was stationed in Germany as the war was ending.”

Filippone also learned the reason for Gazella’s visit to the VA that day. Gazella had medical bills piling up for over a year due to operations. According to Filippone, Medicare footed most of the costs, but Gazella was cutting through red tape to get the VA to cover what was left. He drove over a half hour from Leander, Texas, to the clinic in Austin to see if the VA could pay the remaining balance of $4,000.

“If I had a checkbook, I would have given the money to him right there. I wouldn’t want a World War II vet to move on to the next phase of life in debt,” Filippone said.

He offered to help Gazella who promptly refused. Filippone did the next best thing. He turned to crowdfunding platform GoFundMe and set up an account sharing his plight with the Internet.

Gazella had no idea this was happening.

Filippone, who is running the campaign for seven days, has already far surpassed his $4,000 goal. In 16 hours of the campaign being posted, he raised more than $11,000. His biggest challenge is ahead of him.

“I have to track this guy down. I know he goes to Starbucks every day in Leander—there’s only two Starbucks in Leander. I’m going to go to both, ask around and give him a check.”

Filippone has a word of advice for paying it forward.

“I could have easily just walked away and moved on. It’s nice to give back when you can,” Filippone told Fox News.

“I always say we already have the Greatest Generation—we should be the better generation. Never miss a chance to thank a veteran.” 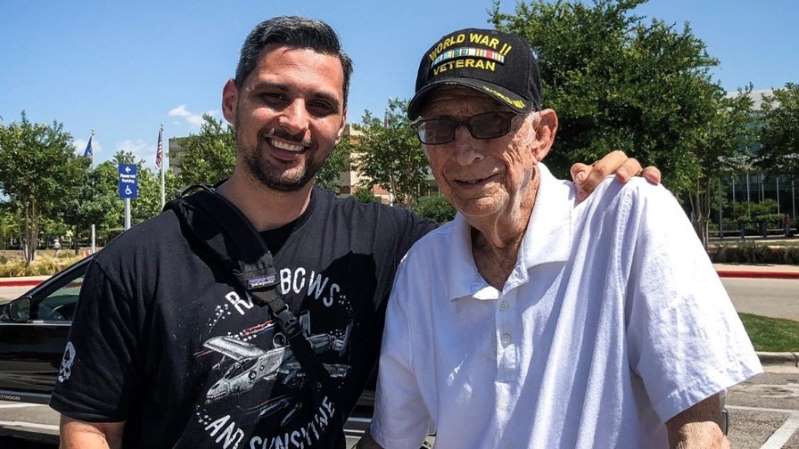