After Lombard teen severely burned in bonfire explosion, friends bring prom to her

Each morning, the mother changes the dressing that covers the burns on her daughter's face and neck, examining how much the delicate skin beneath has healed.

The gentle dabs of gauze feel like shards of glass on the 15-year-old's cheek.

"It's painful, excruciating," she said, closing her eyes and cringing at the memory of the daily ritual.

Korryn Bachner was among a dozen teens injured last month in a backyard fire pit explosion at the Glendale Heights home of a friend.

Authorities have said one of about 25 high-school-aged students at a party poured gasoline from a 5-gallon can onto the fire; that teenager was a boy who was also severely injured in the explosion, according to law enforcement. Glendale Heights police are still investigating and would not comment on the case, though they have said they don't believe the incident was malicious.

Korryn was released from the hospital May 10, but her injuries meant she had to miss the remainder of the school year - as well as her May 12 prom at Glenbard East High School.

So her friends and her date decided to surprise her by bringing the school dance to her Lombard home, greeting her with a pink bouquet and decorating her family room with a string of white lights.

It was an homage to this year's prom theme: a night of a thousand lights.

She wore the dress she'd selected before the fire - a black off-the-shoulder top with a floral-patterned flowing skirt, with a shimmery necklace and matching bracelets adorning her neck and wrists.

The sophomore had planned to wear her hair in two French braids woven into a low bun, but her short brown locks were too badly singed in the blaze and had to be cut off. Her face was still cloaked in bandages and a knit tube dressing, with openings for her hazel eyes, nose and lips.

A friend painted her nails a bright shade of pink to match the flowers on her dress, the flesh of her hands shiny and newly grown, still recovering from the burns.

"I told them to go have fun for me, enjoy the night," she said in her family room, which was filled with balloons, flowers and get-well posters signed by friends.

But the teens had agreed that Korryn would enjoy the end-of-the-year traditional dance in some fashion, even if they had to hold a makeshift prom in the hospital, recalled her mother, Ellen Bachner.

More than two dozen high schoolers filled the home at some point throughout the night, taking pictures and dancing to Ed Sheeran's "Perfect." Some went on to attend prom later.

Her date, a close friend and Glenbard East senior, spent the rest of the night watching movies with Korryn on her couch.

"He stayed with me, instead of going to prom," she said. "He said he was going to bring prom to me somehow … no matter what."
'Unreal'

Korryn's date had invited her to dance with an elaborate "promposal."

On April 20, she arrived home after dark to find lit candles spelling "PROM?" across her driveway. Photos from the night capture her smiling profile, the contours of her face smooth and unblemished.

This was eight days before the fire pit explosion, which she describes as a horrible accident.

"It just happened so fast, no one expected it," she said. "It was, like, unreal. You didn't think it was happening. I knew I was on fire so I stopped, dropped and rolled. I don't know if I fell out of my seat, because of the impact."

The Bachners said she was treated for almost two weeks at Loyola University Medical Center in Maywood, eight days in the intensive care unit and five days in the burn center. Second- and third-degree burns cloaked her hands, neck and face, they said.

Some nights in the hospital brought nightmares, she recalled, her mind replaying images of the fire.

Officials have not released the names of the victims; the Bachners described the teens as having varying degrees of injuries, some still hospitalized.

There were also boys at the scene who weren't injured but "helped put the flames out, and helped put water on everybody … who feel guilty that they didn't do enough," Ellen Bachner said.

She tells them her daughter is alive because of them.

"There's a form of survivor's guilt, for sure," she said.

The gauze is applied to Korryn's face almost like papier-mache, thin strips coated with a topical burn ointment.

Changing the dressing takes about an hour from start to finish.

"The parts that are really sensitive, I don't even want to touch," she said.

She sits in the bathtub to keep warm, a heater on full blast raising the temperature in the bathroom as she shivers. Oxycodone helps relieve the pain but also makes her nauseous.

"And she still feels it," her mother said.

Ellen Bachner said the doctors are waiting to see how much the burns will heal on their own.

Korryn hopes she won't need surgery. She longs to return to the varsity cheerleading squad and sometimes attends practice to be supportive, though it's hard to watch everyone else doing what she loves when she can't participate.

She doesn't really know how her face looks under the dressing. Once she glanced at the mirror unintentionally, catching a quick glimpse of her right side, the more badly burned side.

To her mother, the raw, new skin appears a little bit better each time the dressing is removed and replaced.

"Every day, I see improvements," she said. "Every day another layer comes off, which is what we need to get down to that fresh skin, which is so painful. … But burn healing is a long, long process. It heals through time." 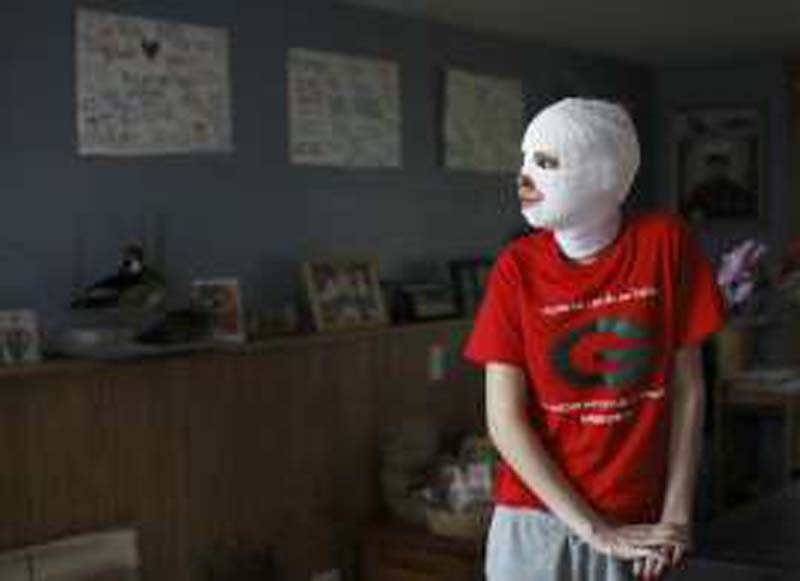