After 45-year ban lifted, ice cream trucks a source of excitement for this town

By Rafael Guerrero, The Courier-News

Devin Formell and Izzie Palacios could have bought their strawberry shortcake and ice cream sandwich bars at nearby gas stations or supermarkets, but the jingle coming from Jim Cremeen's ice cream truck meant they could do so right from Abbott Field in Elgin, Ill.

While ice cream trucks are commonplace in the summer for most Chicago suburbs, they haven't been seen or heard in Elgin for 45 years. And their presence now that the ban has been lifted is causing adults to act like kids and kids to wonder what they're seeing.

"I live down the street and we were about ready to leave," Palacios, 18, said. "But then we heard (the ice cream truck), so we ran out looking for it."

The first ice cream trucks granted permits by the city of Elgin hit the streets this month. Two of 12 applicants have already received permits to sell in Elgin, and the other 10 are still going through the process, Elgin communications specialist Molly Center said. Ice cream truck owners must undergo background checks, obtain mobile food truck permits and purchase insurance, among other requirements.

"I didn't plan on all this celebrity status," he said.

But that's exactly the way he's been treated in some neighborhoods. People start texting friends and family when they see his truck, and the rain and cool temperatures last Saturday weren't enough to keep customers away, Cremeens said.

"They came out with heavy coats, umbrellas ... they're shouting that they want ice cream," he said.

The enthusiasm from the young and old alike is "fantastic" and different from other towns where he pedals his goods. Some children have never seen an ice cream truck in person, and some adults haven't seen one since they were children, he said.

"The only ice cream trucks I'd seen before were in (Chicago)," Palacios said.

"For $2, a parent can make their child's day," Cremeens said.

Cremeens and Ziyad Al-asuli - the second person to get a permit from the city - said they have no issues with the restrictions they must follow. Among them, no sales within 500 feet of an elementary or middle school during classes and one hour before or after school. Once school's out, it won't be a problem, they said.

Al-asuli, a 15-year veteran of the ice cream truck trade, said he hopes the council will limit the number of permits issued so the competition will be more limited. Vendors must re-apply for a permit on an annual basis.

But this year there's a pent-up demand so it's not yet become "routine" for Elgin residents, he said.

"This is what I see when I'm driving here: everybody likes it, everybody wants it," Al-asuli said.

(The Courier-News is a publication of the Chicago Tribune.) 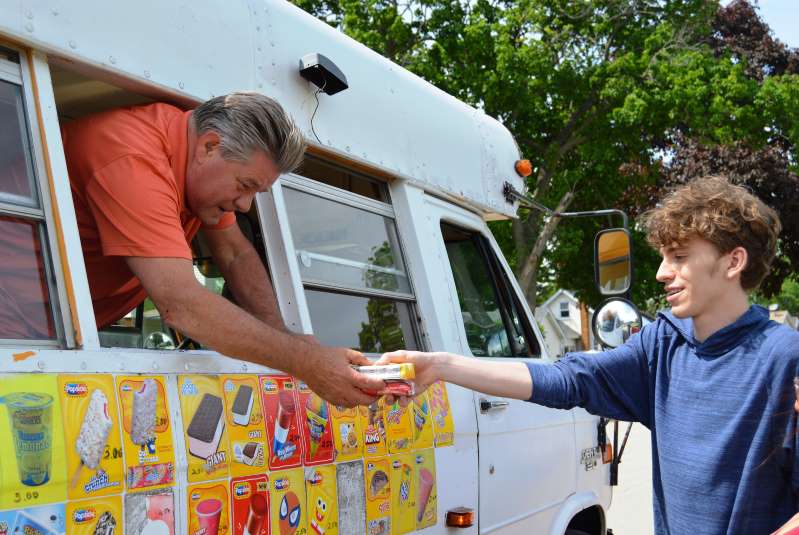