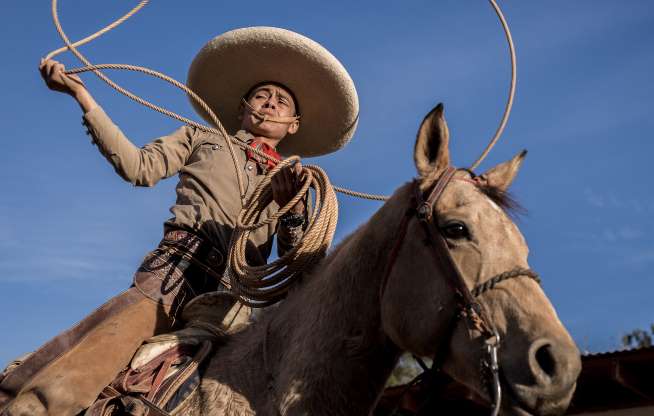 Almost every day after work, Edmundito Ríos, 21, heads straight to a ranch and practices charrería — also known as Mexican rodeo — for about four hours.

Ríos has been participating since he was about seven. Now, he is on a team that competes in tournaments.

"It took me years to know what I know now," he said.

A national sport in Mexico, many may not know that the quintessential American rodeo derives from charrería, which began hundreds of years ago as a way to herd livestock. Apart from Mexico, it is still practiced in the American southwest, particularly in Texas. Those who take part in the sport are known as charros.

Often a family tradition in Mexico, charrería is passed down from one generation to the next. Children are introduced to the sport when they're as young as two or three and many charros spend decades in the ring.

Although there are young people interested in charrería as a link to their cultural heritage, the sport is considered a dying breed. Many fear it won't be passed along to future generations.

In 2016, UNESCO inscribed cherreria in the Representative List of the Intangible Cultural Heritage of Humanity.

Modern charreadas feature a total of nine different skill events, known as suertes, which in English is the pllural word for "luck." There is also a female rider event called escaramuza, in which the women ride sidesaddle and demonstrate their equestrian ability.

Unlike American rodeo, charros don't win prizes. Instead, they invest in the sport. They buy gear imported from Mexico and pay to participate in competitions, which can get expensive.

U.S. law prohibits horses from being brought to the ground as they would in Mexico. "If you do it wrong or you don't know the right way, you might get hurt, not the animal," explained Ríos.

Laughing as he pointed to his horse nuzzling open the lock to his stall, Ríos said the animals often become a charro's best friend. "The relationship you build with the horses is like a bond that no one will ever, ever understand," he said.

Ríos and his father are trying to keep the sport alive; the family has passed down charrería skills for three generations.

Rios' father was the first in his family to practice it in the U.S. He was a charro for over 40 years until he had an accident recently. Now he oversees a team and has passed down the tradition to his son.

"When you put on that suit, you're wearing Mexico," Ríos said, referring proudly to his traditional costume, including his hat, as he got ready to mount his horse for yet another competition.