© Julie Northcott/Facebook Stephanie Northcott hugs her son Dalton and her granddaughter Maddyson from her hospital bed after… By David Wil...

Like many parents, Stephanie Northcott dreamed of the day she would get to see her son Dalton walk across the stage to receive his high school diploma.

That dream took on an urgency when she was diagnosed with a rare cancer in 2015 and given 10 months to live.

"For two years, that's all she's (been) talking about. She wanted to make it to her son's graduation," said Julie Northcott, her friend of 21 years.

The two women are as close as sisters and share the same last name because Julie is married to Stephanie's ex-husband.

Stephanie's son, Dalton Jackson, finished all his requirements and was set to graduate from Halls High School in Halls, Tennessee, on May 18.

But doctors were afraid she wouldn't make it, so her friends and loved ones worked to bring the graduation to her.

"No matter what, you're going to see Dalton graduate," Julie recalled telling Stephanie. "I just had to do it one way or another."
Graduation day

Getting the school on board was easy. Julie said the principal told her "just give me a time and a date and I'll be there."

The medical staff at Baptist Memorial Hospital East in Memphis was just awesome and did everything to make sure Stephanie was as comfortable as possible, Julie said.

"My baby's graduating," Stephanie said as staff wheeled her hospital bed into the chapel.

Once Stephanie was settled in, "Pomp and Circumstance" started playing and Dalton walked in along with his football teammates in their jerseys and friends from his graduating class in their caps and gowns. He gave his mom a big hug and some balloons.

It was a struggle for Stephanie to speak, but she thanked everyone for giving her this moment and told Dalton she'd always be with him.

"You can do anything you ever put your mind to," she said. "Don't ever forget that."

Then Dalton got his diploma.

There were cheers, applause and so many tears when the graduates threw their caps in the air.

Dalton helped his mom stand up, and they danced to Rascal Flatts' "I Won't Let Go."

When she couldn't dance any more, she got back in bed and sang to Dalton and her 7-year-old granddaughter, Maddyson, who sat in her lap.

Stephanie is battling cancer from Lynch syndrome, a genetic condition that increases the risk of several types of cancer. Her daughter, Amber, died of the same condition in 2012 at just 21.

She's been in the hospital since April 25.

Julie said Stephanie hasn't been doing well, but they hope to bring her home soon, so she can go into hospice care.

"She is so strong-willed. It's just amazing how strong she really is," Julie said.

Julie said they've set up a fund to help pay for Stephanie's funeral expenses at the Bank of Ripley in Tennessee. 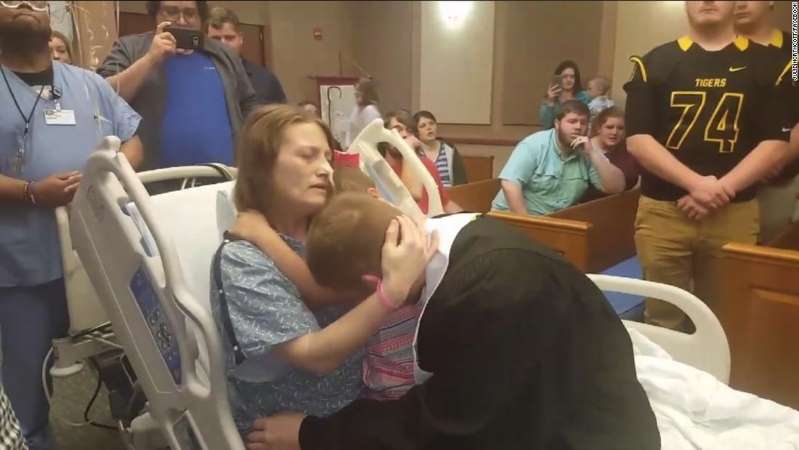