2 sisters, a bully and the apology 60 years in the making that set them free

© Donna Vickroy/Daily Southtown/TNS Bruce Smit, 71, recently met with Lorraine O'Kelly and Kathleen Rys, two sisters that he and… By D...

On a recent Wednesday afternoon, some 60 years after they graduated from grammar school, the Rys sisters sat down and had a meal with a classmate for the first time.

Over soup and coffee at a Tinley Park Panera, Kathleen Rys, 72, and her sister Lorraine O'Kelly, 70, made amends with one of their childhood tormentors, Bruce Smit, 71.

The event, which involved flowers, hugs and a tearful apology, came more than half a century after the hurt began.

Lorraine and Kathleen Rys were in third and fourth grade, respectively, when their family moved from Chicago to Monee, in the 1950s. As new kids at Monee Elementary School, they soon found themselves on the outs.

"I don't know how it all started, but by the time I was in sixth or seventh grade, everyone was avoiding the Rys sisters," said Smit, a Frankfort, podiatrist whose wife, Tammy, organized the breakfast forgiveness meeting.

As the group openly discussed the memories, wounds and scars that bullying can have on both victim and perpetrator, they pondered the reasons it happened at all.

Was it because the sisters were shy?

Was it because some kids thought they were of Native American descent? (They're Bohemian.)

Was it because they didn't fight back?

It remains a mystery, Kathleen said, but what is clear is that however petty or fleeting the excuse, the pain of being shunned by an entire student body goes deep and stays there "forever."

No one ate lunch with them, made plans with them or sat next to them on the bus.

They didn't go to dances or join clubs or participate in sports.

"We couldn't," Lorraine said. "Nobody wanted us. If we walked down the hall, all the kids would huddle on the other side and let us walk by ourselves."

"They called us Risk instead of Rys," Kathleen said. "We were the untouchables."

The beat down continued as the students moved onto Crete-Monee High School.

"When we climbed the stairs to go to our other classes, if someone bumped into us, they'd run to the washroom to wash their hands," Lorraine recalled.

Kathleen still has her yearbook that doesn't contain a single signature.

"We only had each other," Kathleen said.

And after Kathleen graduated, Lorraine only had God.

The women say none of the faculty or staff ever intervened on their behalf and that they didn't share their plight with their mother or father because "we weren't close with our parents.

"We just kept it to ourselves," Lorraine said.

But they did pray, even though the shunning carried over into church and religious education classes. "We prayed to God because we knew at least he loved us," Lorraine said.

After he didn't make the basketball team in high school, Bruce Smit joined the band and found a new group of friends. The Rys sisters fell off his radar.

It wasn't until he was in medical school some years later that vivid memories of his own cruelty in junior high began to haunt him, he said.

"My earliest recollection was in sixth grade, when you start changing classrooms. Everybody's in the hallways and I would be with the other guys and see Kathleen walking down the hallway, her head down, holding her books, walking slowly. And all of us guys would be flat against the wall until she passed. Then we'd giggle and walk away. Now how rude is that? It's just crazy. But that's the kind of memory that I have," he said, wiping at tears.

With his chosen profession one of healing, Smit said for decades he was plagued by the image of himself inflicting pain.

"We were cruel," he said. "And for apparently no reason other than following the crowd."

Over the years, Tammy Smit said, "Bruce would just start to cry at times. He'd wonder what happened to the sisters, if they landed OK."

One day a few weeks ago, after her husband again bemoaned the past, Tammy took to the internet and within a few hours found an address for Kathleen in Oak Forest. Then she went on Facebook and found Mary O'Kelly, Lorraine's daughter, and offered to set up a meeting.

The notion of revisiting the pain was not well-received by Kathleen, who had never married, let alone gone on a date.

"I have very few friends today," she said. "It's been hard for me to make friends. I'm not very sociable, and I think that's because of everything that happened. I just stay to myself."

After high school, Kathleen landed a job with the Illinois Central Railroad.

Things went well for a few years, until the company hired one of her former classmates, who picked up where she and the others had left off and began turning the other staffers against her.

"I thought, 'Not again. Even here, at work?' " Kathleen recalled.

Lorraine fared better, landing a job with the Federal Reserve Bank, where she met her husband, and later working at Oak Forest Hospital.

She made friends at work whom she continues to see today.

"They are beautiful friends, but I never told them about any of this," Lorraine said.

She also went on to have three children. Her daughter Mary, however, said there were repercussions there too.

"She is the sweetest person, and to hear that your mom was bullied hurts," said Mary, now a mother of two boys. "I can definitely tell it affected my aunt, who is really shy.

"But it also affected my mom and how she raised us. She was forced to be a mouse (as a child) and she wasn't very strong in the discipline area. I kind of took advantage of that," Mary said. "I was basically a bully to her."

Yet, she said, her mother stood by her as she went through her own struggles. "She is a good person," Mary said.

It took some convincing, but Lorraine finally got Kathleen to agree to meet with Bruce.

"I told her if someone wants to apologize, you have to accept it," Lorraine said.

When they gathered at the Panera in the Brookside Marketplace, Bruce and Tammy hovered in a corner while Bruce gathered his thoughts and composure.

A few tables over, the sisters sat watching. Finally, seeing how stressed Bruce appeared to be, Lorraine yelled out, "I forgive you." Then Kathleen echoed the sentiment.

Bruce broke into tears. "I'm so ashamed, so embarrassed," he said. "But I'm so happy they're still here and that I can finally apologize. It's cathartic."

Even though he admits children don't understand the potentially lifelong consequences of their behavior, he said he hopes his apology will prompt others to seek forgiveness for the pain they inflict on others.

"Stop and think about what you're doing," he said. "Think about the lifelong scarring. I really feel lousy about what we did.

"I don't know if any of the other (Monee Elementary School bullies) will ever come forward or not. But I feel better that I did," he said.

"I was an adult before it rang a heavy bell in my heart, but it shows it's never too late to seek forgiveness," he said. "I am grateful to Tammy for making this happen."

Lorraine said, "This is a beautiful thing. It's like a beautiful grace. It's just wonderful that a person from 60 years ago can ask for forgiveness. It's like a miracle to us. It's a healing to us."

The Smits are members of Revolution Church in Manhattan. They relayed their story to youth pastor Julian Sandoval, who shared it in a recent sermon.

"I think it's an incredible story of faith in action," Sandoval said. "I used it as an example of the power of forgiveness. It's never too late to say 'I'm sorry.' Even when there has been such an incredible amount of hurt, forgiveness can be a way to restore, in this case, dignity," he said.

"A lot of people talk about forgiving or about asking for forgiveness," he said. "But to realize you injured somebody years ago and that you still want to make amends is really phenomenal."

From her vantage point behind the counter at Panera that afternoon, Jacquita Adams quickly realized "something magical" was taking place.

When she realized it was redemption, she told the crowd she was picking up the check.

"So many people might forget or choose to forget that they hurt someone. There aren't many people who get a chance to heal from that. This is special," said Adams, of Dolton, who is staff supervisor at the cafe.

Then she shared her story with the group. She'd been abused as a child by "someone close," she said. The violation left her a hurt and angry teenager. "I had a lot of hatred in my heart because of it," she said.

"Then one day I realized it had to stop. I found God. That taught me if you forgive, it's not just for the other person, it's for you too," Adams said.

"So I tried it. Once I did that, a big weight was lifted off my shoulders," she said.

Now, Adams said, she gets pleasure from seeing joy in others. Now she spreads light instead of darkness, she said.

"I love to see forgiveness because I would love to get that apology from the person who hurt me," Adams said.

"The weight of carrying something that heavy on your heart is a real burden," she said. An apology and its acceptance, she added, make everyone "free." 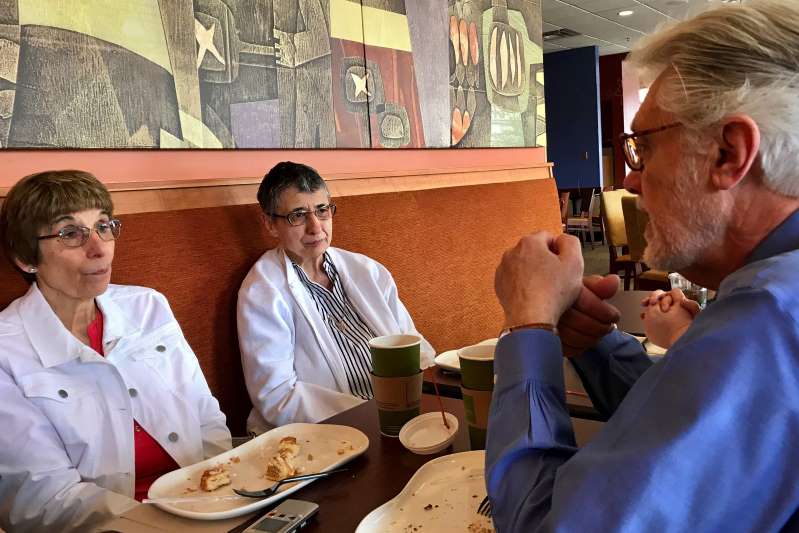