By Daily News Staff A 700-year-old Banyan tree was essentially brought back to life with the help of a drip in Telangana. According to news ... 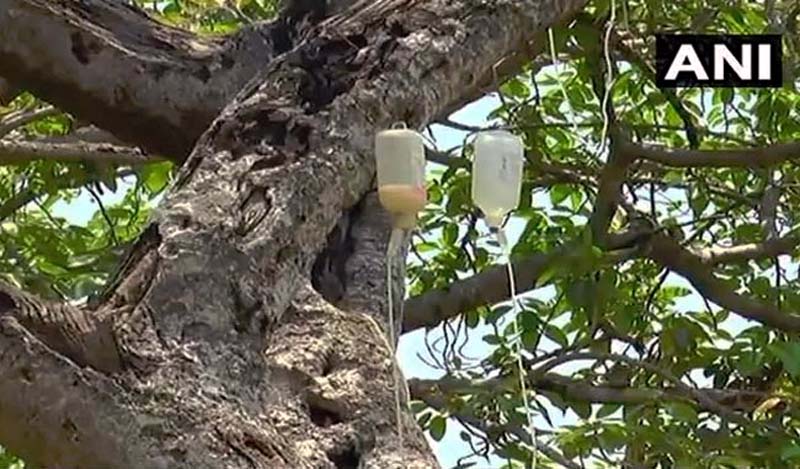 By Daily News Staff
A 700-year-old Banyan tree was essentially brought back to life with the help of a drip in Telangana. According to news agency ANI, one of its branches was infected by termites. Desperate to save the tree, officials put up drips filled with diluted pesticides to kill off the insects. The majestic tree, in the state's Mahabubnagar district, spreads across three acres and is believed to be the second biggest Banyan tree in the world.
A major tourist reaction, the tree is popularly referred to as "Pillalamarri" or "Peerla Marri" in Telangana. However, it has been shut to the public since last December, after one of its branches came crashing down due to the rampant termite infestation, reports Telangana Today.
Alarmed officials put up drips of the diluted chemical Chlorpyrifos for every two metres of the giant banyan tree in an attempt to get rid of the wood-destroying insects. Photos show the chemical being administered to the giant tree much in the way a saline drip would be administered to a patient in hospital.
"We diluted the Chlorpyrifos chemical and started pushing it into the stem by keeping holes, but it didn't work out. The solution was coming back instantly. Later we started injecting solution like a saline drip. This process has been effective. Secondly, we are watering the roots with the diluted solution to kill the termites. And in a physical method, we are building concrete structures to support the collapsing heavy branches," Mahabubnagar District Forest Officer Chukka Ganga Reddy told the Times of India.
"The tree's health is stable now. We are hoping it will become normal after a few days. We are also planning to open the site to the public after discussion with the higher officials, but this time people have to see it from a distance away from the barricades," the official added.

Mahabubnagar District Collector Ronald Rose is reported to be "personally monitoring" the revival of the tree.