Teen Basketball Players Kneel During Funeral Procession Out of Respect

© Provided by CBS Interactive Inc. Teen Basketball Players Kneel During Funeral Procession Out of Respect By Inside Edition Staff , Inside...

A group of kindhearted basketball players took a knee as a funeral procession passed through their Louisiana neighborhood.

Sisters Lynn Bienvenu and Johannah Stroud were in Washington Parish attending the funeral of their cousin, Velma Kay Crowe, when they saw the boys stop their pickup game outside Franklinton Junior High School and drop to their knees to show support to the family.

The sisters did not want the moment to pass without allowing others to witness, so they snapped a quick photo and shared it on social media.

"They took a knee not out of disrespect, but out of honor," Bienvenu wrote in her post. "There was not an adult in sight to tell them to stop playing."

The picture has since gone viral.

It reportedly isn’t the first time the boys have showed respect in this way.

According to local citizens, coaches and teachers at Franklinton have made a point to instill in the students the importance of showing respect when a funeral procession passes.

Bienvenu says the simple act has reminded her why she has such a huge heart for her small hometown.

"This meant a great deal to our family," Bienvenu said. "May God bless each one as I feel they will achieve greatness." 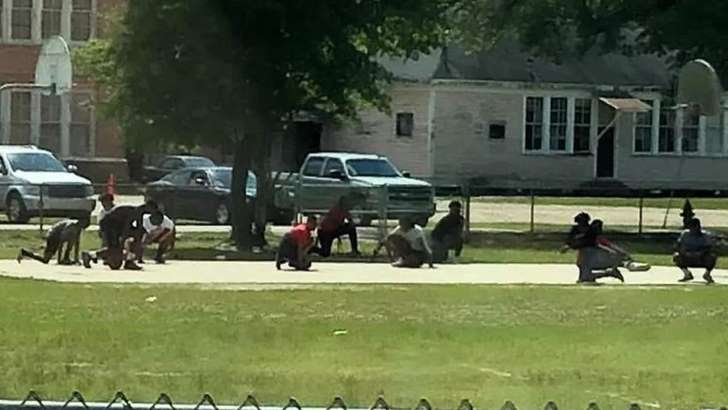