Sailing around the world -- with three kids

© Caspar Craven How to sail the world with three young children By Danielle Rossingh , for CNN  He had competed in one of the world's ...

By Danielle Rossingh, for CNN

He had competed in one of the world's toughest sailing races and forged a successful business career, but neither of those came close to Caspar Craven's biggest challenge.

That was setting sail on a two-year odyssey around the world with his inexperienced wife and three young children, aged nine, seven and two.

They didn't even have a boat when the idea first took seed.

But their journey, which began in 2016, was life-changing for everyone, and Caspar has distilled their adventures into a book: "Where the magic happens. How a young family changed their lives and sailed around the world."

The idea for the family's circumnavigation came one hot day in June 2009 during a garden party in a leafy commuter village in Kent, England.

"We had two children then, and I was the co-owner of a small consultancy business, working 18 hours a day and barely saw my wife and my children," Craven told CNN by phone. "It was one of those things, like, 'What are we doing all this for?' Our marriage was strained."

Life would never be the same again when his brother-in-law told him about a family who had sailed around the world.

"He went on to say what a ridiculous thing it was," Craven said. "And that was the seed of the idea that caught the imagination of both my wife and I, and for the next six months. We literally sat down every weekend, got pens and paper out, and sketched out where we wanted to go, why we wanted to do it and why it was so important to us."

Although Craven had competed in the 2000 BT Global Challenge around-the-world race for amateur sailors -- at the time known as the "world's toughest yacht race" -- his attorney wife, Nichola, had only been sailing twice, both times getting sea sick.

"We didn't have a boat either, and when we told everybody, they laughed and thought it was completely ridiculous," Craven said.

Craven started his first business catching crabs and lobsters when he was 14 before going to university and training as a chartered accountant. He used some of his business experience to plan the trip.

"We created a vision statement, which we put on the wall in our kitchen," said Craven, a former investment banker at KPMG, turned e-commerce entrepreneur in 2001 -- building, growing and selling companies mainly in the technology sector.

"It basically said, 'On August 1, 2014, we are going to set sail.' So we gave ourselves five years to transform our finances, our relationship, how we worked together as a family, to get a boat and to get all the training and preparation in place. The sea can be a dangerous environment, that's why we did so much preparation."

"Creating magical life experiences for our children, let them explore and see the world," Craven said.

Over the next five years, Craven said he created three separate $1 million businesses -- one of which, a data analytics company, he sold for a seven-figure sum while he was sailing across the Pacific Ocean.

There were some hurdles to overcome: Craven had back surgery five weeks before departure, while the family also welcomed their third child, Willow, in 2012.

"We were outnumbered," laughed Craven.

After passing through the Panama Canal they joined the World ARC in Panama so they could sail in company across the Pacific to Australia.

But after leaving Tahiti en route for Australia, disaster struck.

More than 500 miles from the nearest piece of land and in gale force winds, they lost all their power.

"We are, as they say, dead in the water," Craven wrote in his book.

With no generator, engine or electronic navigation in 30-foot waves and with the nearest boats about 100 miles away, it would have been easy to panic and start blaming each other.

Instead, the family turned to the values they had talked about before embarking on the trip.

"It's about how you get resourceful in a difficult situation," said Craven, who now works as a business consultant and motivational speaker.

"How do you deal with things? Rather than turning to blame and getting angry, focus on how you work together and how you solve the problem in hand."

Having tried and failed to restore power, the family resorted to plan B -- sail with no electrical power and try to reach the nearest land, which was the tiny island country of Niue, west of the Cook Islands.

For the next three days, Caspar and Nichola hand-steered the yacht through heavy seas and driving rain, navigating by the sun, the moon and the stars, until they reached Niue.

"We just found humor in the situation and we worked together as a team," Craven said. "It became one of our proudest moments working together."

From Australia they sailed to Indonesia, before undertaking a second Atlantic crossing to Brazil. After traveling through the Panama Canal for a second time they had a long haul up the Pacific coast of North America to their final destination -- San Francisco.

READ: The man who sailed around the world in 42 days

With the two oldest children in primary school when they left, how did the family cope with homeschooling?

"We left the UK with a boat full of school books and a clear plan of what we were going to do," Craven said.

The reality of life on board proved to be somewhat different.

"Sitting down and trying to get my son Columbus to learn about the Tudors, he wasn't even remotely interested," Craven said. "So, basically, we chucked the books over the side and we said to the kids, 'What are you interested in?'"

One of Columbus' passions was fishing. Having learned everything there was to know about fish, he set up a business making and selling fishing lures and writing fishing advice sheets, which he would take round the other boats when they were docked.

"What we discovered just letting the kids follow their passion and interests, it took them to every subject," Craven said. "To maths, to science, to literacy, to business, to communications. Their learning rate went up a thousand-fold."

Although the two oldest children had missed out on some subjects, they soon caught up on their return. Craven said they have been "flying through" recent exams to get into private schools in the UK.

Perhaps more importantly, their two-year journey has given the children "an amazing bank of memories and experiences."

"When Willow was three, her first day of school was in this tiny little French Polynesian island and she has wonderful memories of going to school there," Craven said.

The trip has also helped them become well-rounded individuals capable of dealing much better with adversity than most kids the same age.

"Their social skills, their confidence and how they deal with things, their emotional resilience, is just remarkable," Craven said.

Since finishing the trip, the family have divided their time between their home near London and their boat in San Francisco.

They continue to go on adventures, including a trip last year when they sailed Aretha on a month-long voyage between Canada and San Francisco. 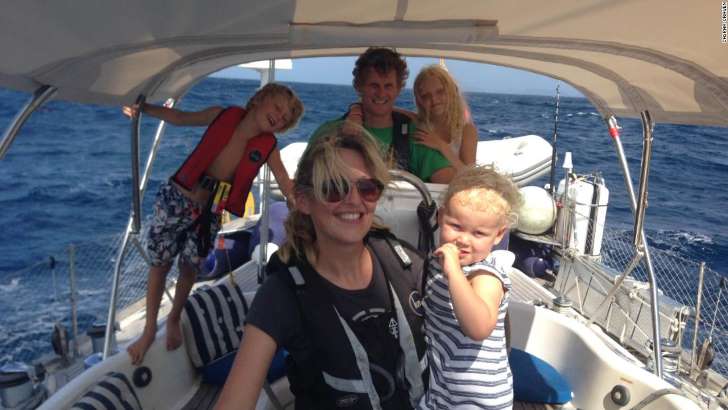