© Provided by Fox News Oswego Firefighter/Medic Sean O’Gorman saved three girls who were caught in a rip current off the North Carolina c...

A New York firefighter is being hailed as a hero after rescuing three young girls caught in a rip current along a a North Carolina beachfront. The save came just two days after a 4-year-old boy was swept out to sea off the same coast.

Sean O’Gorman from the Oswego Fire Department, was vacationing with his family in Emerald Isle, N.C., on Thursday when he noticed two girls in the water who appeared unable to return to shore. A third girl who was attempting to save them also became stuck.

O’Gorman said he ran to the girls’ mother, who then called 911. Deciding not to wait for help, O’Gorman swam out to the girls himself.

SEARCH SUSPENDED FOR BOY, 4, SWEPT AWAY TO SEA OFF NORTH CAROLINA COAST

"We were sitting, watching the girls playing in the water about 75 yards out, and I noticed they stopped trying to get back to the shore, and I think they were caught in a rip current,” O’Gorman told The Charlotte Observer. “I decided to swim out, which was easy. Getting back was a struggle, with me trying to tow them all in. They were hooked onto my feet."

The firefighter, who will turn 52 in the coming days, said the girls “did not panic,” and he believed that the local fire department “would’ve gotten to them” had he not gone out.

Deputy Fire Chief for Emergency Management Justin Norfleet told Fox news that their department trains “extensively for marine operations including swift water rescue, ice rescue and dive operations.” He said they are responsible for the shores of Lake Ontario in Central New York and the Oswego River.

News of the rescue comes just one day after police in Kitty Hawk, N.C., called off the search for a missing 4-year-old who was swept out to sea while walking hand-in-hand with his mother along the beach.

The unidentified boy, said to be from New Hampshire, was swept out by a rip current just before 4 p.m. on Wednesday. In suspending the search a day later, police said they have “now transitioned to recovery efforts.”

The boy had yet to be found at the time of publication on Friday night. 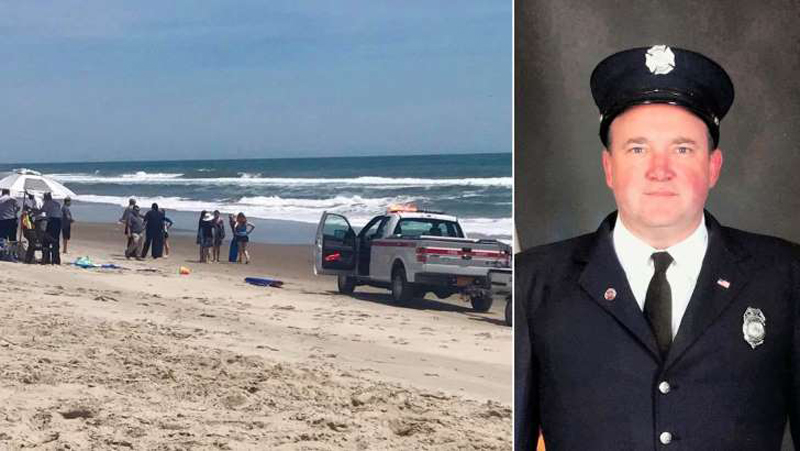