Minority student at Stuyvesant aims to fight for racial equality

The senior born to working-class Nigerian parents has excelled at Stuyvesant High School in lower Manhattan and was accepted to each of the 18 colleges she applied to, including every Ivy League university.

But here’s another way she’s special: Venus is one of just a half-dozen African-American kids in her class at Stuyvesant. So when more than 800 students from the country’s most prestigious public high school walk down the aisle to collect their diplomas in June, very few will look like her.

Venus is calling time on segregation.

“It’s a big shame, because blacks have been put at a disadvantage throughout history,” the 17-year old said. “There are so many talented black youth and they’re being denied the opportunity.”

The teen, named for tennis great Venus Williams, is co-president of the Black Students League at Stuyvesant and captain of her track team. She also volunteers at a number of organizations that help the homeless and underserved students.

Venus wants to be a lawyer like her heroes, Barack and Michelle Obama, and plans to have a civil rights practice to help disadvantaged people find justice.

She knows something about that, again from her schooling. Venus completed her college applications on her own, without the tutors or consultants often available to wealthy kids. With a 94 average, nine advanced placement courses under her belt and clear-eyed view of the world around her, schools from Howard to Harvard are fighting to call her one of their own.

The teen hasn’t decided which school she’ll attend yet — much of that choice will depend on her scholarship offers.

Venus’ rewarding journey has not been an easy one. Her commute from her family’s humble Queens Village home to Stuyvesant’s gleaming Tribeca campus takes up to two hours each way.

Few kids in her mostly black neighborhood even knew about the city’s elite specialized high schools, a group of some of the nation’s largest and most famous public schools that includes Stuyvesant, Brooklyn Tech and Bronx Science. Even fewer could ever have dreamed of attending one.

But when Venus’ fifth-grade teacher told her about the specialized schools, and that they were top options available to public school students, her sights were set.

Venus spent the next three years training for the admissions exam that’s administered in the eighth grade to the students who elect to take it. When the time came, she aced the exam.

She credits her mother, a city worker, and her father, a small businessman, for inspiring her quest for academic excellence. The Nnadis have four children, and three of them attend specialized schools. The fourth is still in middle school.

“Education is the key to success, especially to people like my parents who came here as immigrants,” Venus said. “They instilled in me that I always have to work hard.”

Her mother, Henrietta, came to the U.S. from Nigeria on a lottery diversity visa in 1997 with her husband, Nnadi’s father, Sylvester.

“We were hoping to have a better life for the kids,” Henrietta Nnadi said. “And with three kids in specialized high schools, I think we’ve done well so far.”

But the school system has too few stories like those of the Nnadi children.

Mayor de Blasio vowed on the campaign trail in 2013 to overhaul how children are chosen for New York City’s elite public high schools, saying the high-stakes admissions test should no longer be the only factor in the selection process.

“These schools are the academies for the next generation of leadership in all sectors of the city, and they have to reflect the city better,” he said at the time.

Five years later, the test-based admissions system remains — and the vast majority of kids who attend the city’s top public schools are Asian and white.

Former schools Chancellor Carmen Fariña rolled out a number of programs designed to better prepare a more diverse group of students for the admissions test, but those efforts failed to make much of a difference.

Just 527 black and Hispanic kids were accepted into the city’s elite high schools in 2018, virtually unchanged from 524 kids last year.

Only 4.1% of elite school offers went to black students and 6.3% to Hispanic kids, even though they account for nearly 67% of the overall student body.

Meanwhile, the city’s top schools offer a poor reflection of the communities they serve. Incredibly, Venus said she didn’t encounter another black student in any of her classes until her sophomore year at Stuyvesant.

“It was a huge culture shock, to go hours throughout the school day without seeing anyone who looks like me,” she said.

She said the city must do better to diversify Stuyvesant and other top schools.

“One test alone shouldn’t be the sole factor used to admit students,” she said. “They should make admissions more holistic, and more aligned with what they do at college.”

Education Department officials said the city would grow a free test-prep program from 670 seats to approximately 1,600 in 2019.

“We’re reviewing any further steps we can take to make our specialized high schools more reflective of our city,” Lapeyrolerie said. 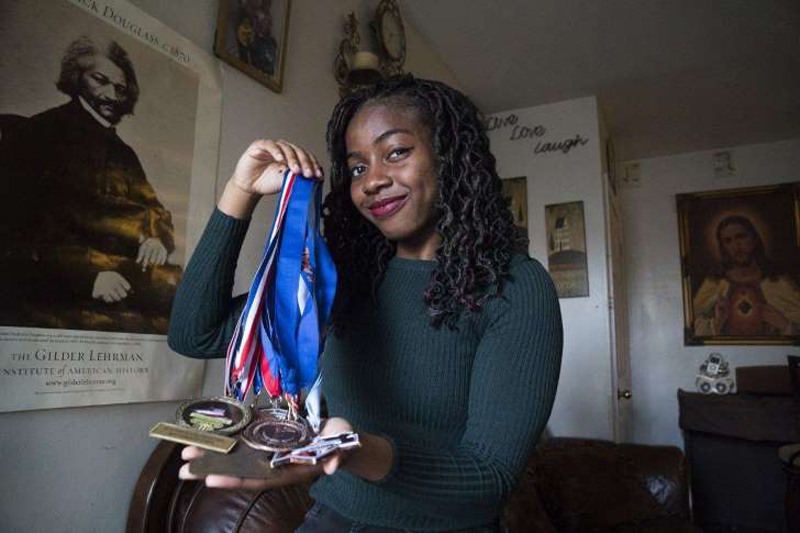