An escaped miniature pony received a little help getting home, thanks to local police officers.

Alfred, the pony that ran away from his Florida farm, was seen being walked home through the open door of a moving Clewiston Police Department cruiser last week.

“We walked it all the way back to the pasture," Officer Jennifer Diaz told InsideEdition.com. “We had to shut the highway down, cross the pony over the highway and then keep blocking all the roadways to get the pony back."

Diaz and her partner arrived on the scene when witnesses said they saw the tiny horse running down U.S. Highway 27 after manipulating a lock on a fence at his pasture.

"Sure enough, as I pull up, the pony is galloping and racing toward the car," she said. "The horse ended up trying to run in toward my vehicle but when it saw my flashing lights, it got spooked and it started running into the neighborhood."

Diaz said her partner was good at "cowgirl stuff," and hoped they would have an easier time taming the pony, but no such luck.

“It was almost like playing 'Ring Around the Rosie' with us and chasing us back and forth," she said. "I couldn’t stop laughing."

Onlookers clearly saw the humor in the situation as well, stopping and taking pictures and even offering carrots and fruit to the two officers to help them bait Alfred.

"The horse would stop and look at the carrot, and then it was like, 'Do I want to eat the carrot?'" Diaz recalled. "And then it would keep running. It was like having a moment."

About 30 minutes later, they were able to get the pony under control, and even though they joked Alfred would probably fit into the back seat, they decided to walk it all the way home.

Diaz said the other horses were glad Alfred was home, and even gathered around the fence as he returned. 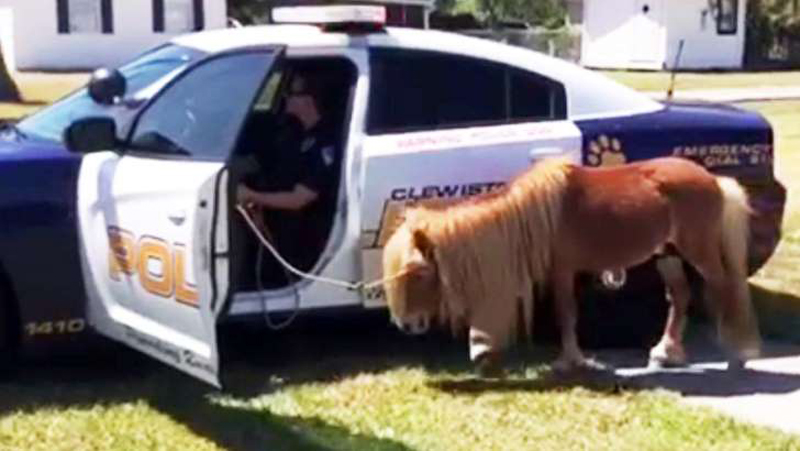