Joan Hart is a "grandma cuddler" at in the NICU at NewYork-Presbyterian Morgan Stanley Children's Hospital. ...

Joan Hart, 81, is a “cuddler” and soothes babies in the NICU by patting them on the back, holding their tiny hands, using a pacifier or swaddling them. At times, she holds them with help from the nurses.

“When I hold them, sometimes I hum or sing — tunes like ‘You Are My Sunshine’ or Frank Sinatra’s love songs — or I talk to them. I tell them, ‘You have to eat and sleep so you can get big and strong.’ I talk to them about their future. I say, ‘You think a pacifier’s good? Wait till you see ice cream or lollipops or pancakes,’” she told Health Matters.

Hart said she’s always been a “wannabe nurse” and many of her family members are nurses. She added that she’s had a passion for volunteering in hospitals and working with children.

Hart retired from her job as a senior staff administrator at IBM and joined the Cuddler Program in 2011 after volunteering at the hospital for two years. She became their first cuddler.

“The words weren’t out of her mouth when I said, ‘Of course I would! Who wouldn’t?’ The rest is history,” Hart said.

Hart said she falls “in love” with the NICU babies every week and will volunteer six or seven hours a week to help them. A cuddler is expected to volunteer four hours a week.

“I fall in love every week,” she said. “The minute you hold them and look into their sweet faces, you connect instantly. Each one has its own way to my heart.”

Johanna, whose son is in the NICU, called Hart “a grandmother” to her son after she helped soothe her newborn.

“She showed him love and support when I couldn’t be here. She has such an amazing heart. You can see she’s selfless and has such love and compassion. I’m so thankful for her,” she said. 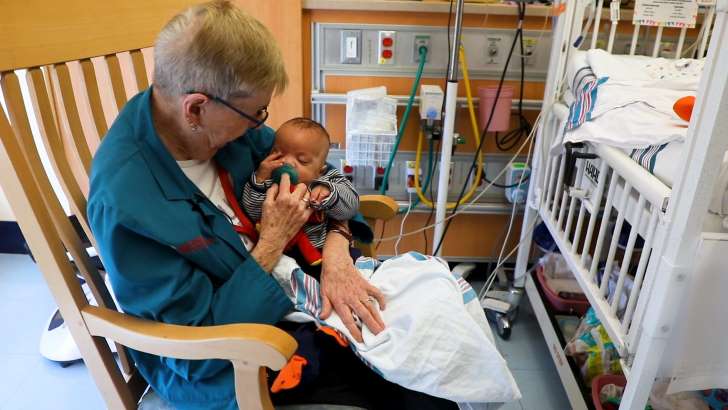